Through video, president Erdogan participated in the ceremony of finishing the construction of Canakkale Bridge Towers between the two ends of the European and Asian continents, which is the longest bridge of its kind in the world.

Despite the Corona crisis, the wheel of construction in Turkey and the huge achievements have not stopped, Corona which has swept economies and capabilities of most countries in the world, and in less than a month, Turkey announced many of the huge projects it has opened or almost completed advanced stages of, including the important project of 1915 Canakkale Bridge.

With the video participation of Turkish President Recep Tayyip Erdogan in the ceremony of finishing the construction of Canakkale Bridge Towers 1915(Canakkale 1915 Bridge), Which took place on Saturday, the 16th of May 2020, President Erdogan spoke of many important points about this mega project and many of the projects that have been recently finished or the one that will be opened soon. 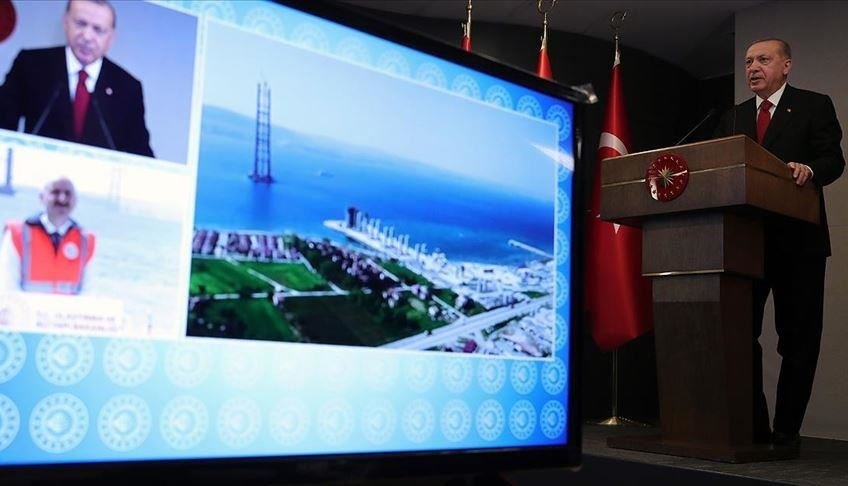 In his speech, President Erdogan touched on the importance of the bridge, its strategic location, and its historical symbolism, saying: "The Canakkale 1915 Bridge holds the title of the longest bridge of its kind in the world, thus, it will decorate the Dardanelles Strait, and it will be a victory symbol for the historic Battle of Canakkale. This bridge, which is located on the Dardanelles Strait, is a historical dream, and thanks to Allah, we have been able to turn this dream into reality".

Erdogan explained the importance of the strategic bridge after finishing it, considering it one of the most important crossing points between the highway networks connecting the two banks of the Marmara Sea as it contributes in reducing the duration of the crossing between the two ends to only 6 minutes, while crossing the two sides of the two banks takes about an hour and a half by ship and ferries, this will have positive benefits for the Turkish economy and the movement of people alike.

Erdogan explained that finishing the construction of the four towers of the bridge holds great importance, as: "the distance between each tower is 2023 meters, which is an affirmation of achieving our goals in the first centenary of the founding of the Turkish Republic in the year 2023". 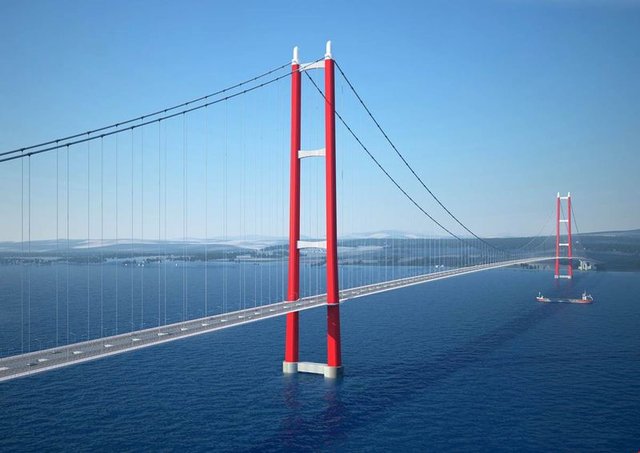 He also added: "Our country's strong transportation infrastructure has become a winning card in the hand of Turkey especially in the new world order, which will be absolutely formed in all political and economic sectors after the Corona pandemic".The President expressed his sincere gratitude to all workers for completing this historic project from the moment of laying the foundation stone on the 18th of March 2017, and it is planned to be opened on the same date in the year 2022. On the ground of the project, there are about 5 thousand people working including 649 engineers in addition to 895 heavy equipment vehicles, they are working 24 hours a day in shifts to complete this huge project.

The 1915 Canakkale Bridge is built over two bases with 333 meters of length at the end of each bank, its towers are 318 meters high and the distance between its two bases is 2023 meters. The bridge will connect the two areas of Gelibolu on the European side, and Lapseki on the Asian side.

Speaking about the importance of the road network that has been built in Turkey in the past two decades, President Erdogan stressed that the fact that Turkey has a large highway transportation network is a cornerstone in the development of the country and its economic growth.

"We have created more than 18 thousand kilometers of organized roads through day-and-night hard work, thus, the total length of roads throughout Turkey is more than 27 thousand km". the Turkish president said. 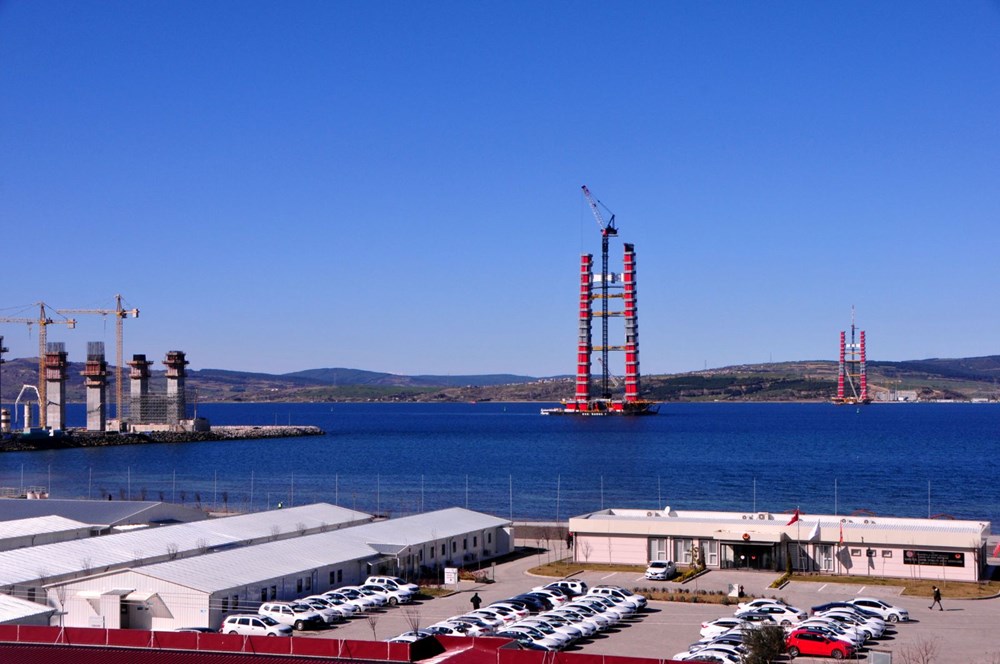 In his speech, Erdogan touched on Turkey's achievements in the past 18 years where railway rails were created with a length of 1213 km, in addition to building more than 30 airports since the date he assumed country, bringing the number of airports throughout Turkey which are available to serve the Turkish people to 56 airports. There are also many road, air, sea, and rail transport projects that are still under construction, and upon opening them, Turkey will become an important transit center that meets the needs of the entire region.

In his speech, President Erdogan pointed to Turkey's achievements in the health field during the past 18 years, which was evident in building thousands of hospitals and increasing the number of health sector employees to more than one million people, such as almost completing two new hospitals in Sancaktepe and Yesilkoy areas of Istanbul, which were accomplished as part of Turkey's efforts to fight the Corona pandemic.

In this context, Erdogan referred to the opening date of the second section of Basaksehir Hospital in Istanbul on the 21st of May 2020, of which Erdogan will participate in the opening with the Japanese Prime Minister via video.

Istanbul Canal is one of the most vital projects taht will add more meauty and elegence to Istabul, and ease maritime tr...