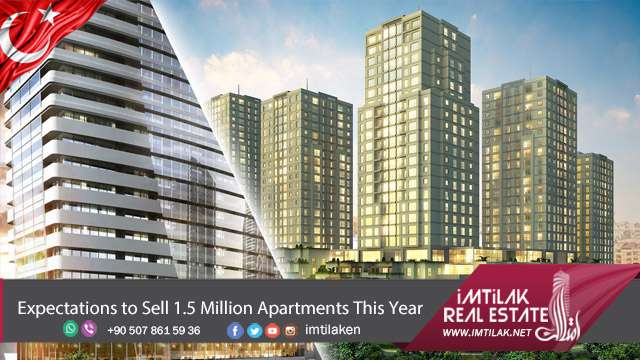 The number of properties sold in many Turkish cities has been published by the Turkish economic daily Donya newspaper. Reports show a clear rise in the number of apartments, shops and offices sold in the first third of this year.

The report pointed out that the latest statistics issued by the Turkish Statistical Institute indicate a clear increase in sales during this period and the direction of the index upward significantly.

According to the report, there was an increase of 10.8% in the number of apartments sold in April of this year compared to the same month last year.

The average selling rate in the first four months was 5.9%. Sales in April played a big role in increasing this rate.

Real estate experts pointed out that investors are moving towards new properties more than those used ones, with sales of used buildings and apartments rising to nearly 5.1%, up to 8.7% in apartments and new buildings.

Experts attributed the increase to investors' confidence in new real estate more because of additional measures in terms of intelligence, security and high services.

The statistics showed that the total sales of real estate last year were a million and 283 thousand apartments to the month of April last year, while the number in April of this year in one year to one million and 372 thousand real estate.

Experts expect the total number of properties sold in other Turkish cities to reach 1.5 million units throughout the year.