Turkish Elections: President Erdogan Inaugurates the Reign of the Second Republic of Turkey

The head of the Supreme Electoral Commission of Turkey Saadi Goven officially announced the victory of President Recep Tayyip Erdogan in the presidential elections that took place on Sunday after receiving a majority of votes...

Turkish Elections: President Erdogan Inaugurates the Reign of the Second Republic of Turkey

On Sunday, June 24, 2018, Turkey witnessed early presidential and parliamentary elections with a record Participation of 88%

The head of the Supreme Electoral Commission of Turkey Saadi Goven officially announced the victory of President Recep Tayyip Erdogan in the presidential elections that took place on Sunday after receiving a majority of votes.

In the parliamentary elections, the People's Alliance, which includes the parties of AK and the National Movement, won 53 percent of the vote (342 out of 600 seats), while the National Alliance, which includes the Republican People's Party "Good party “and" Saadet party " won 35 percent of the vote (191 seats), and the Democratic People's Party 12 percent (67 parliamentary seats). 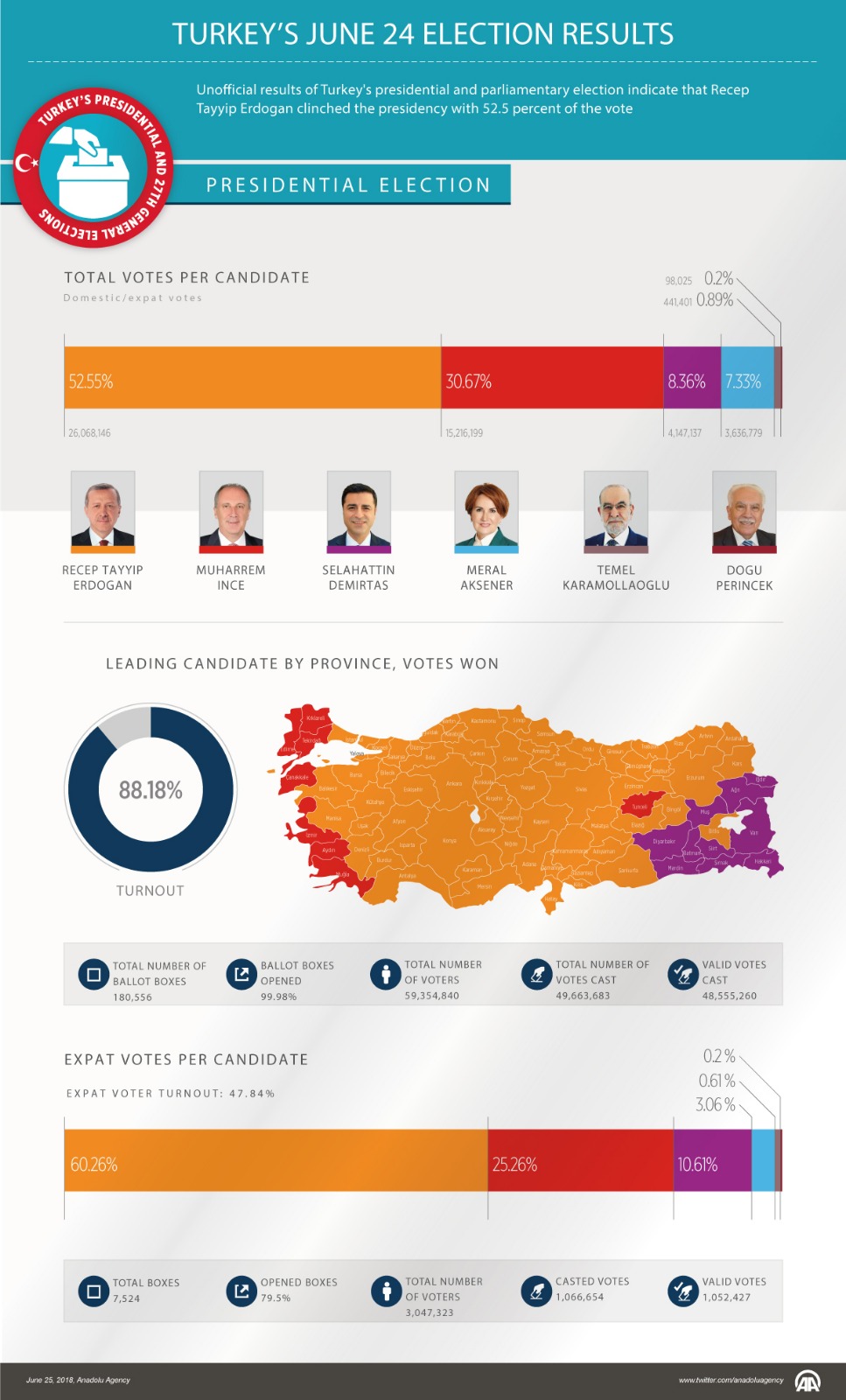 The most peaceful elections in Turkey

On Sunday, June 24, 2018, Turkey witnessed the most peaceful elections compared to the last three elections that seen 362 incidents, 100 of which were related to the attempted filming of ballots.

"You stood by us in the elections of November 3, 2002 (the first election of the AKP), and you took us to power, and you were with us in all the elections until we got to where we are now," president Erdogan said.

"Today you also stood by us in the June 24 elections, which are the compass that will determine the future of our country for half a century, or even for a century"

"He stressed that Turkey gave the whole world a role model in democracy, praising the people's choice for him and his alliance.”

No loser in the Turkish elections

Turkish Prime Minister Ben Ali Yildirim said that "there is no loser today in these elections. It is a day of victory for 81 million Turkish citizens." "The democracy that has emerged in the presidential and parliamentary elections is the most important turning point in our history."

Yildirim stressed that he is satisfied with himself at the end of his term as the last prime minister in Turkey with the application of the new presidential system.

"Turkey will wake up to a new era, the rule is always subject to the national will, so there will be no coup after today," he said.

Turkish march continues to achieve the goals of 2023

Turkey seeks to achieve a series of great goals by 2023, which marks the first centennial of the proclamation of the Republic, most notably among the top 10 economies in the world, and for this purpose has developed a political and economic vision that includes several plans; to reach a national GDP of $ 2 trillion.

President Erdogan's 2023 plan aims to raise the Turkish citizen's income to $ 25,000 a year, reduce unemployment to 5 percent and increase foreign trade to $ 1 trillion a year.

And is complemented by tourist targets to attract 50 million tourists annually, Increase tourism revenues to about 50 billion annually, and make Turkey among the top five most attractive tourists.

One of the goals is the dream of transportations, which focuses on the construction of a new railway of up to 30 thousand kilometers, and paying more attention to ports, tunnels, bridges and the construction of airports;   the series of goals was initiated with Transition to the presidential system, which was supported by more than 51 percent of the Turks.

In a previous speech, the Turkish president stressed that his country is trying to eliminate the obstacles that stand in the way of investors and businessmen and provide incentives that contribute to their development.

Turkey has become more cohesive in the face of internal and external challenges and is taking firm steps towards its major objectives within a specific plan supported by the Turkish people. Its economy is succeeding in different fields and sectors such as industry, tourism, construction and real estate.