During May of the year 2021, the number of apartments sold to foreigners in Antalya reached 341 apartments, and the sales rate increased by 27%

The attention of investors turned to real estate in Antalya, after Istanbul, which has been an attraction for foreign businessmen in recent years.

Residential sales of apartments to foreigners in Antalya rise significantly

As one of the most beautiful Turkish cities, visited by tourists from all over the world, Antalya, Turkey, has been one of the most important centers of attraction for foreign investors, whether in the tourism or real estate sector.

The sector of real estate sales in Antalya, which is the focus of news through Imtilak Real Estate for today, has witnessed in recent years a remarkable development in quantity and quality, making it the focus of attention and demand from foreign investors wishing to invest in real estate in Turkey.

Thus, Antalya ranked second after Istanbul, as the second most attractive state for foreigners to invest in its real estate in general, and in apartments in particular, and this was accompanied by a significant development in the residential apartments sector.

This great development was shown in the emergence of many urban projects, which offer residential apartments that meet the aspirations and different aspirations of foreign investors.

According to official statistics, the sales of apartments to foreigners in Antalya amounted to 341 apartments during May 2021, achieving an increase of 162%, compared to sales of foreigners in the same month last year.

While sales of apartments in Antalya to foreigners during the first five months of this year amounted to 3,084 apartments, achieving an increase of 27%, compared to sales for the same period last year.

Experts and those interested in real estate considered these figures as evidence of the strength of the real estate sector in Antalya, and that it was not affected by the restrictions on travel and movement, imposed by the spread of the Coronavirus.

It was stated in a press statement by Mr. Salman Ozgun, Chairman of the Board of Directors of one of the largest companies operating in the construction sector in Antalya:

“Our city still constitutes one of the most important centers of attracting foreign investors despite all circumstances, and the recent figures bear witness to this. The sales of apartments to foreigners during the month of ear achieved an increase of 162%, compared to their sales in the same month last year, despite Total closure and official holidays that we have passed during this month. 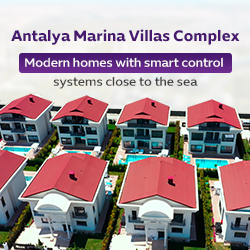 Our goal is to sell 10,000 apartments by the end of the year

In another aspect of his speech, Mr. Ozgun referred to the expectations of record numbers, in the sales of apartments to foreigners in Antalya, until the end of this year, saying:

"With the beginning of the tourism season and the lifting of travel restrictions in the coming months, the apartment market in Antalya will witness a large movement in its sales. We expect foreign sales to reach 10,000 apartments, by the end of this year."

In another aspect of his speech, Ozgun referred to the statistics on the increase in the investment value of the real estate in Antalya by saying:

Ozgun added: "This is evidence of a great demand for real estate investment in Antalya, by both local and foreign investors, and this demand will result in more increase in the investment value, with a high turnout in the coming days."

Apartment sales in Turkey exceed 137,000 apartments and recorded the progress of approximately 15% during the month of O...