Turkey's Nationalist Movement (MHP) leader Devlet Bahçeli on Friday ordered his party to convert its hard currency into aid to the Turkish lira.

Turkey's Nationalist Movement (MHP) leader Devlet Bahçeli on Friday ordered his party to convert its hard currency into aid to the Turkish lira.

According to a statement from the party, Bahçeli instructed his deputy finance minister Mouloud Karra Kaya to "Convert the hard currency as an aid to the Party treasury in 2018, if any, to the Turkish lira starting next Monday.” 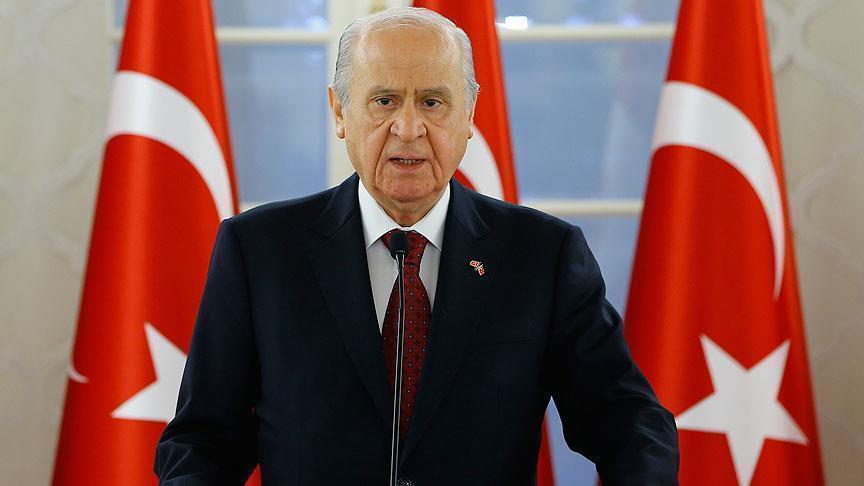 Turkey has recently witnessed an economic war by international forces, which has caused a decline in the exchange rate of the lira and the rise in inflation rates in the country.

Earlier, the Turkish Treasury and Finance Ministry said in a statement that the country's banking system was in a position to manage financial volatility effectively through its robust financial structure and budget.

Turkey's economy is expected to grow between 3 % and 4 % in 2019, and the current account deficit will stabilize at about 4 %.

In a related context, the leader of the Nationalist Party said that the reason for the rise in the price of foreign currency against the Turkish lira, not economic, but for political reasons and diplomatic blackmail.

“Rise in foreign currency prices is not driven by economic reasons, but by political reasons and diplomatic blackmail, and we have not and will not bow down to this," he said in a tweet posted on his Twitter account on Friday 10-08-2018.

"The aim of raising the price of foreign currency is to harm our country and to complete what is achieved in the failed coup attempt," he said.

He called on Turkish citizens to unite in order to counter the unrealistic rise in the foreign exchange rate. "The Turkish lira is our reputation and our honor. It is our respect and our future and a symbol of our independence, let’s help our national currency," he said.