It is the custom of the people of Istanbul these days not to miss the opportunity to enjoy this sense of beauty, so you see them leave their luxurious complexes and offices to spread here and there among the most beautiful gardens in Istanbul

When spring visits the most beautiful gardens of Istanbul, the city's charming conditions change, and there is a new spirit between its sides. The more you move between its orchards and gardens, the more you'll see beautiful frilly clothes revealing some of its wonderful colorful charms.

It is the custom of the people of Istanbul these days not to miss the opportunity to enjoy this sense of beauty, so you see them leave their luxurious complexes and offices to spread here and there among the most beautiful gardens in Istanbul to explore the green gardens, feel the fragrance of roses and wind, and make their eyes enjoy the enchanting colors.

Since Istanbul was the capital of the Ottoman Caliphate for centuries, it was imperative for those who visit it today to experience a creative distinction between the architecture of its building and the beautiful coordination of surrounding gardens In a unique style in which the European aristocratic taste interacts with what the sultans of the Ottoman era had with a delicate taste of everything that is beautiful.

So you see them establish the artificial rivers in their palaces, designing water fountains, and sparkling lakes and they were keen to make them unique and unmatched gardens in the world and brought in various kinds of plants that were not known in their country before.

List of the Top Visited Gardens and Parks in Istanbul

1. Gulhane Park in Istanbul European Side

Gülhane Park is located behind the famous Topkapi Museum, and extends to the Sirkeci area, meaning the Rose House Garden, considered by many to be one of the most beautiful gardens in Istanbul. 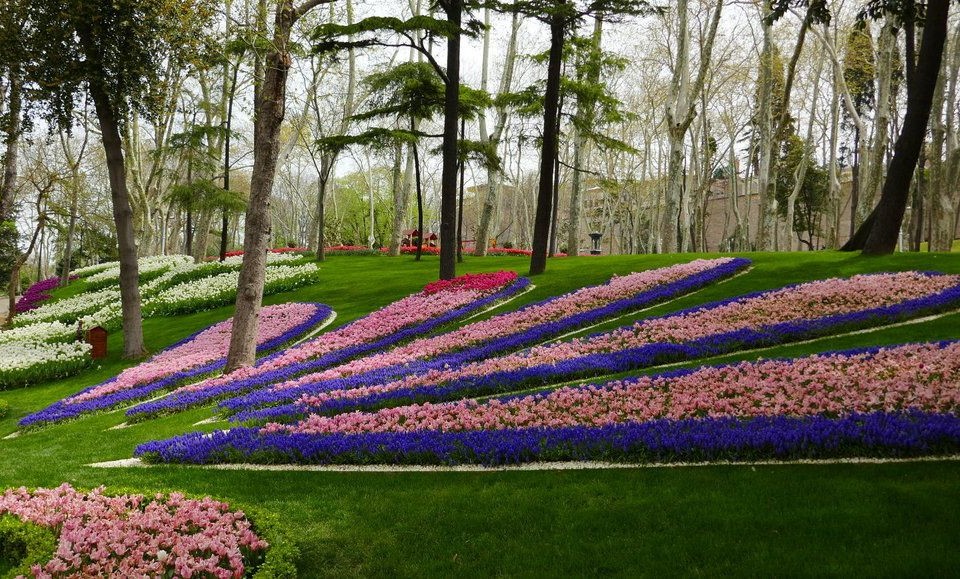 Over the years, several names have been launched on the garden such as Flower House, Celebrity Park, Noblemen Park, Writers Park, and Philosopher’s Park. 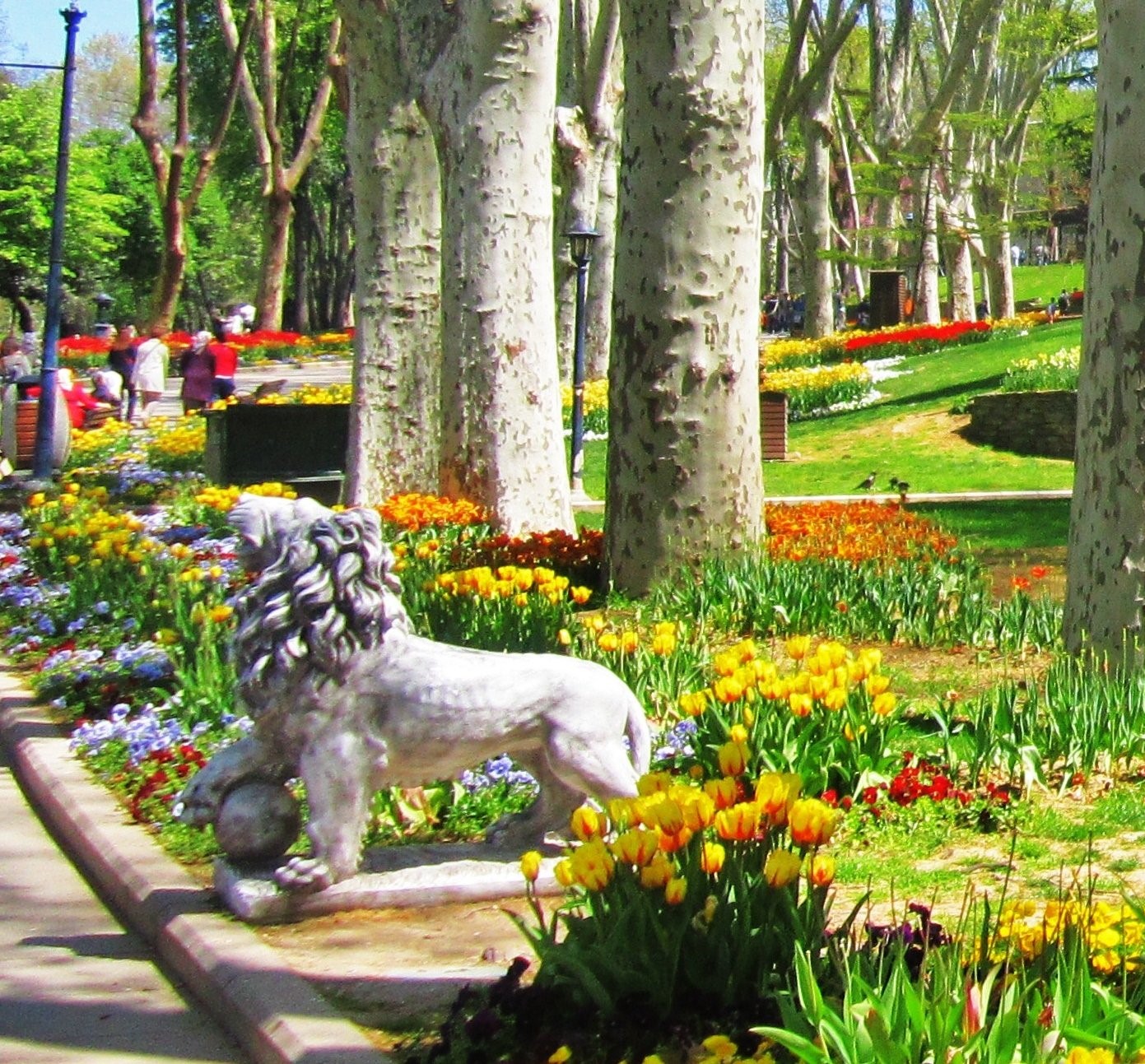 Gülhane Park was opened in front of visitors in 1926 and the park has been renewed several times from the official park of the Topkapi Palace until it became a public park for locals and tourists from all over the world to breathe in the open air and to relax under the shade of the Platanaceae yelping trees or enjoy a coffee shop with a magnificent view of the Bosphorus.

Yildiz Park is located in the district of Besiktas and is one of the largest public parks in Istanbul. The park was part of Yildiz Palace stretches down the slopes of the palace and a wall was built in the reign of Sultan Abdul Hamid II to make inhabitants enjoy the palace. 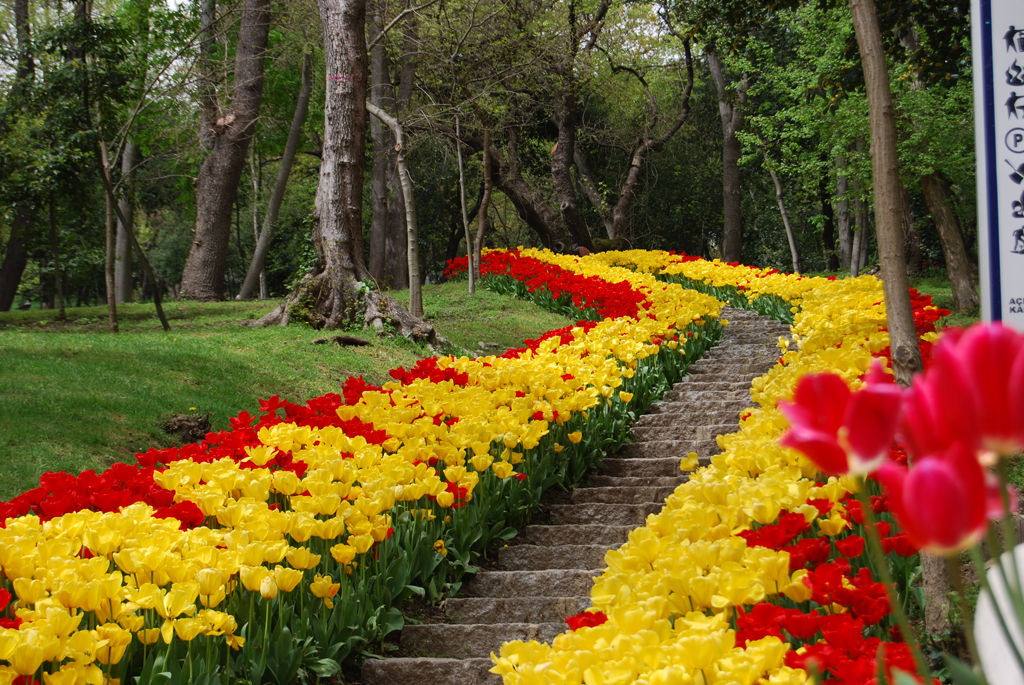 The garden features the most beautiful landscapes, such as flowers, plants, and trees gathered from all over the world. Yildiz Park features artificial lakes and small summer houses and is one of the finest parks for hiking. 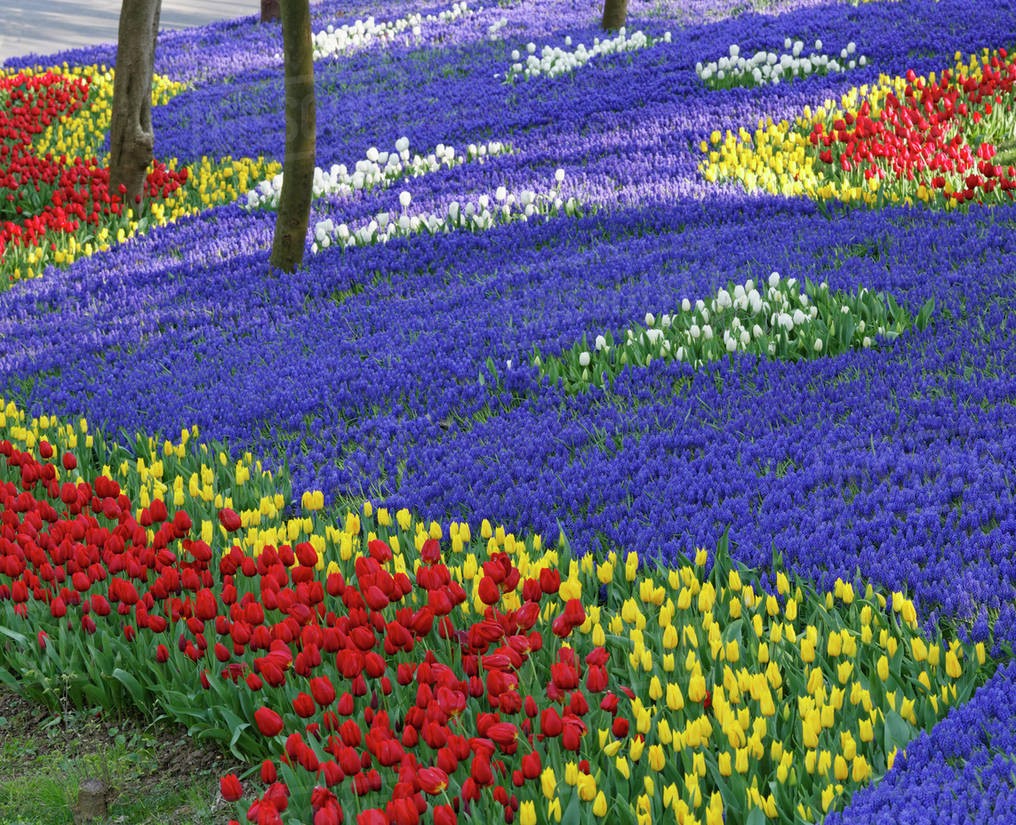 The park includes some 120 species of trees and shrubs goes back to the Ottoman period. It has very beautiful fountains, and on the right side of the park is a small lake where the fish play, and the ducks swim in a beautiful and attractive scene.

Located in the Emirgan district of the municipality of Sarıyer, it is an entertainment destination for tourists and citizens. It is perhaps one of the most beautiful gardens in Istanbul. The park contains more than 120 species of rare trees and plants such as Turkish pine. 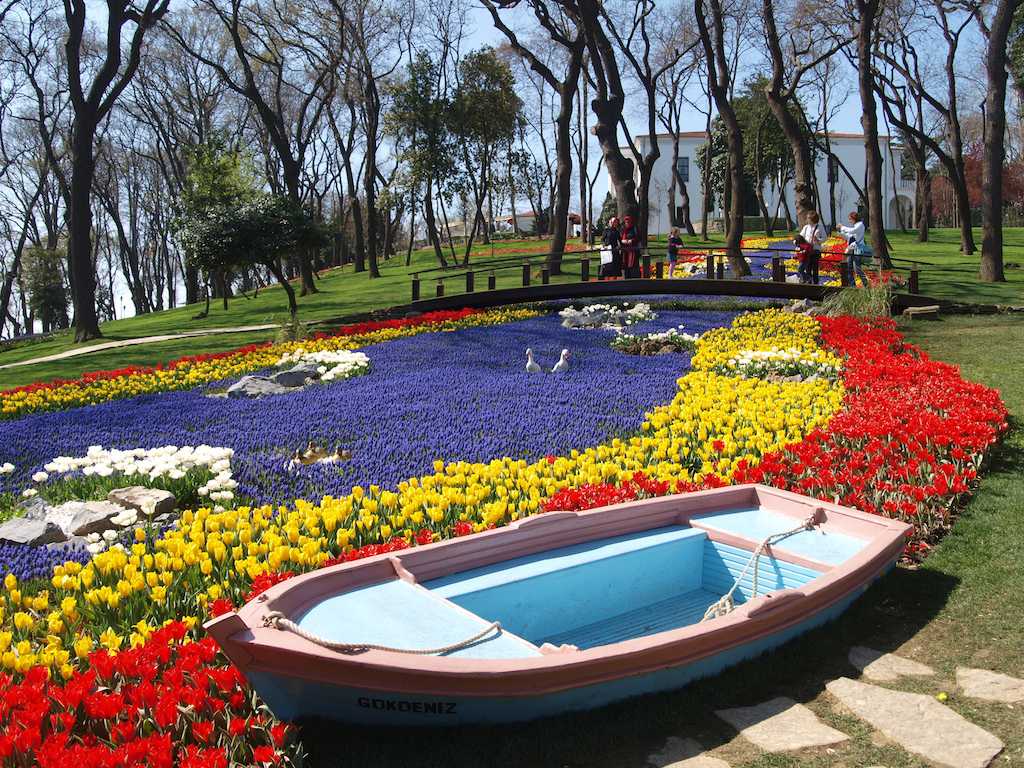 It also hosts lavender flowers and Tulip festivals, and the park enjoys a fantastic nature with spectacular views of the Bosphorus. 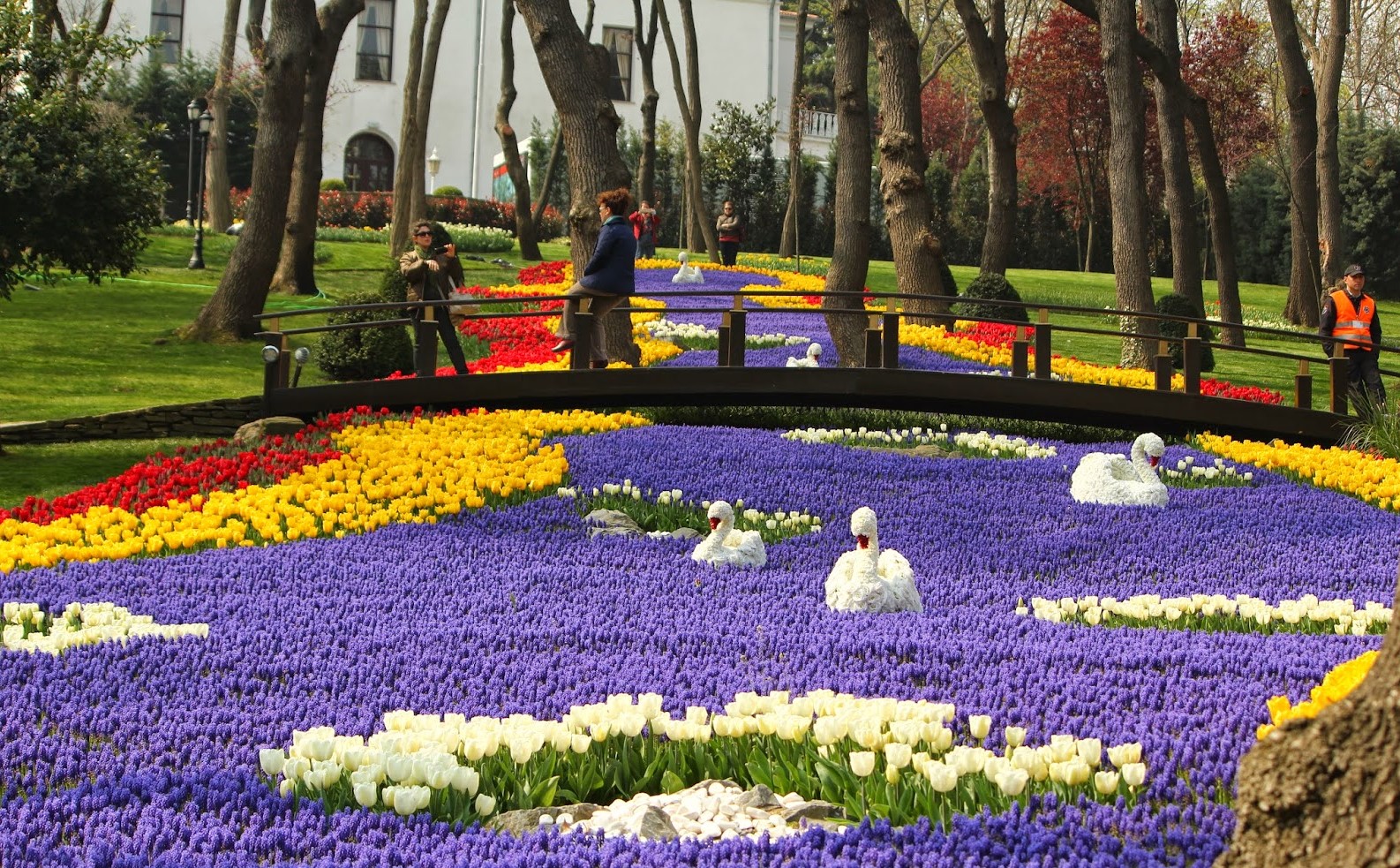 In Emirgân Korusu Park, you must be surprised by the colorful crowd, as if there were pouring flowers on a carpets tulip, a unique flower that amazed the inhabitants of Europe for what the Ottomans had brought to them. 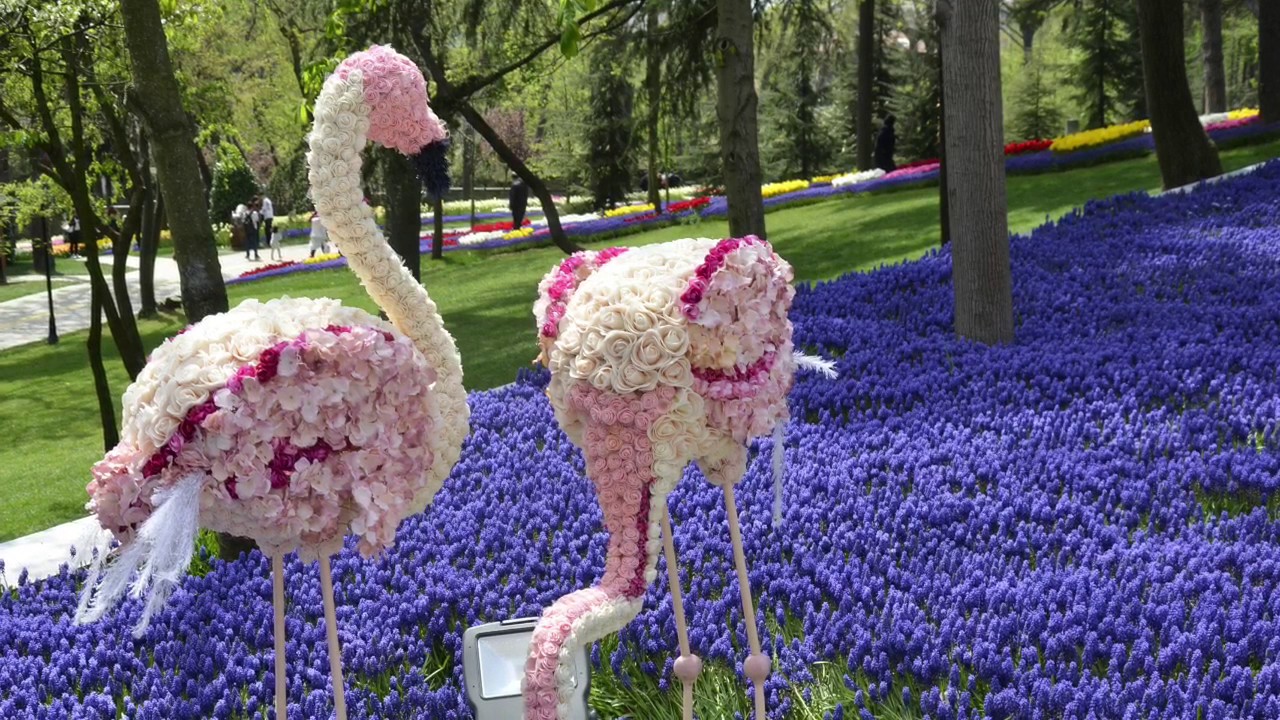 Therefore, it is not surprising to learn that historians have named the name of the Lale flower on the golden period of the Ottoman Empire as (the era of the Lale), where the sultans of that period took care of the arts, culture, and literature, and ordered to plant the tulip everywhere, until the entire country became crowned with that flower. 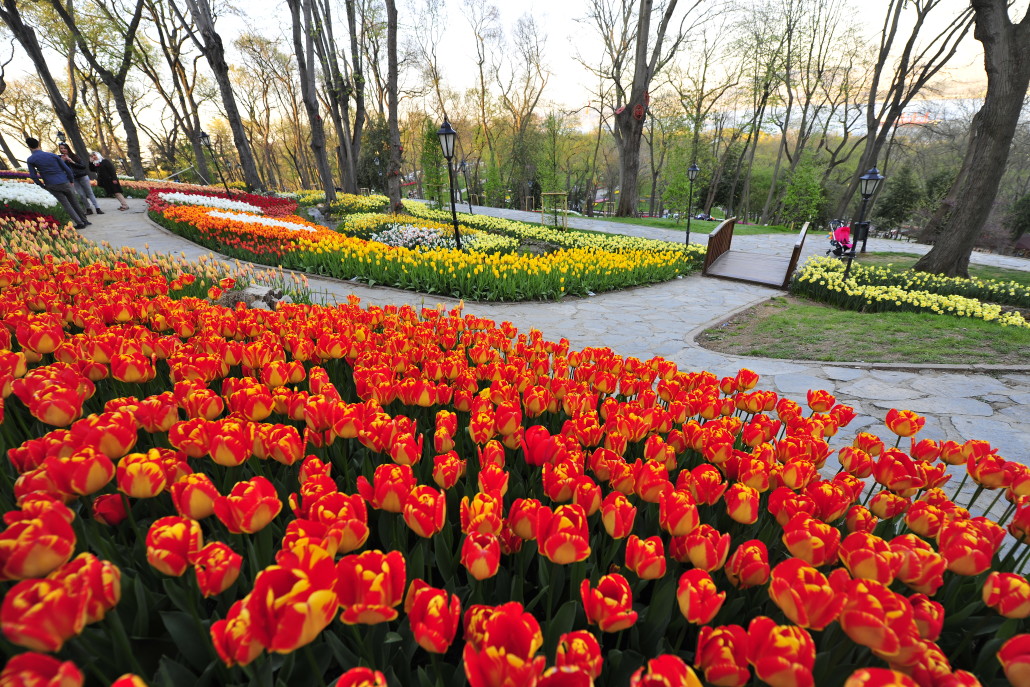 4. Fenerbahce Park in Istanbul Asian Side

Fenerbahçe Park, on the Asian side of Istanbul, is one of the most beautiful and magnificent parks in the city. 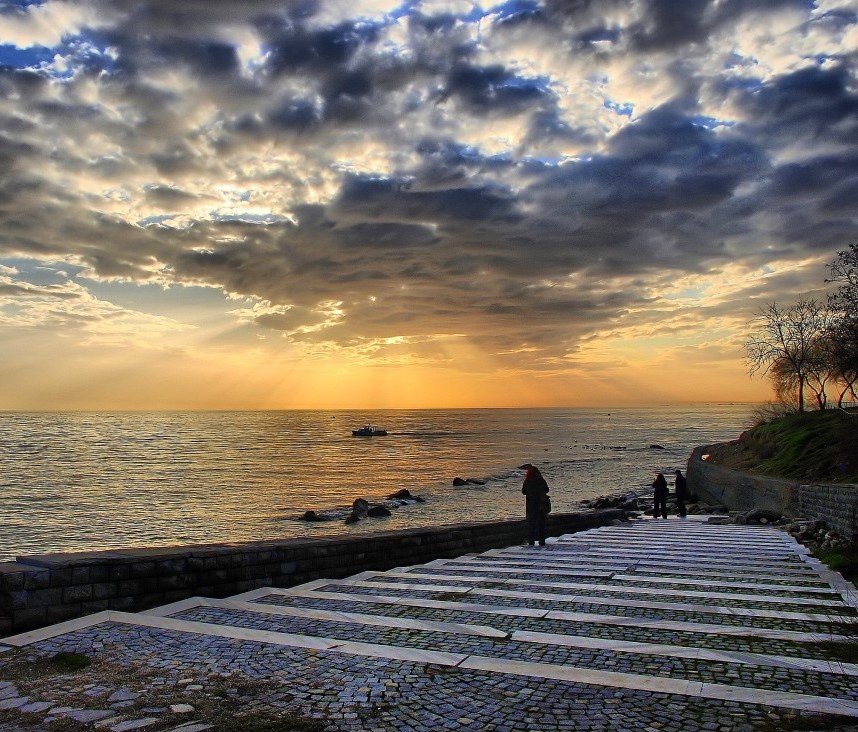 The park was named after the Fener (lighthouse), built in 1857 in the Ottoman era and considered one of the best-preserved lighthouses in Istanbul. It played an important role in preserving the safety of ships as it passed the Bosphorus, which separates the Asian and European sides of Istanbul. 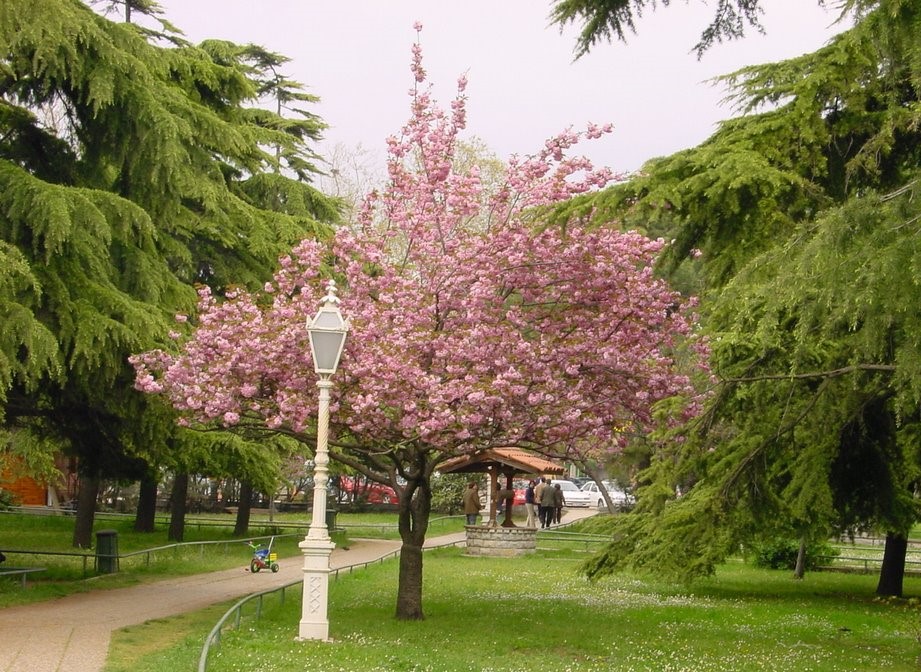 The Garden features unique flora and fauna flowers, and panoramic views of the Princes' Islands, the Sultanahmet Mosque, the Topkapi Palace and Ayasofiya Museum can be seen from the garden.

Göleti Park is located in Bahcesehir district northwest of Istanbul. The park occupies a huge area with beautiful artificial lakes and there are several restaurants and children's playgrounds in the garden. 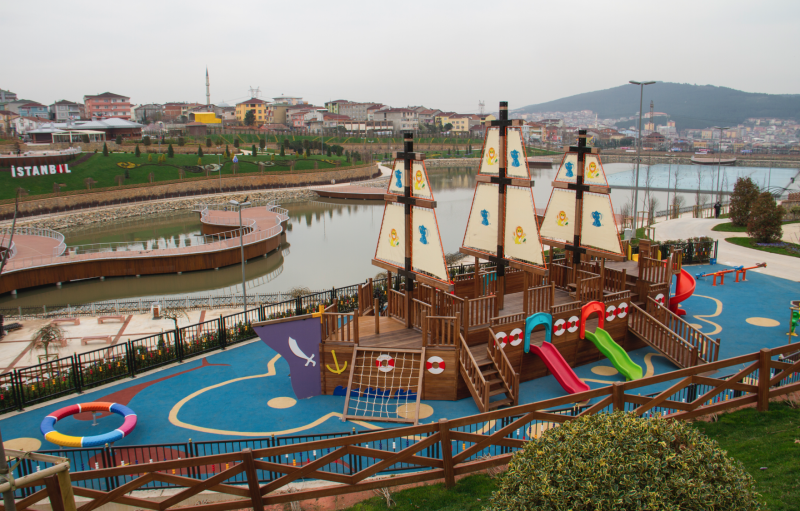 Numerous waterways and lakes have been designed within the park, along with a walkway for sport and children's games.

6. The Coastal Florya Park in Istanbul

Florya Park is located in the Florya area, close to Ataturk Airport, and boasts a magnificent view of the Marmara Sea.

The park has seats for visitors, as well as various games and free sports equipment.

It also includes several facilities and spaces for events and is close to the famous Florya Sosyal Tesisleri of the municipality of Florya.

Which offers a wonderful view of the Sea of Marmara and offers the most delicious seafood and grilled meats at reasonable prices. There is also a café opposite the restaurant that offers many snacks and various drinks.

The city of Istanbul is famous for its many hills, and the most famous of these hills is Çamlıca Hill on the Asian side of the city. In a majestic view, the Mosque of Çamlıca is the largest mosque in Turkey situated above Istanbul's hills, in perfect harmony between its towering minarets and surrounding highlands. Arab tourists know Çamlıca Hill as the Brides hill due to the constant visits of the newlyweds to the region in order to capture the most beautiful souvenirs.

Çamlıca Hill garden is one of the most beautiful areas of Istanbul, where your eyes can see the city as a map on a paper. Here are the Bosphorus Straits and there the bridges with its magnificent architecture. There is the Eminonu region, and from afar you can see the princes' islands scattered over the Sea of Marmara and the ships spread around it through the blue of the sea. At the other end of the hill lies the Asian side of the city in an open panoramic view.

You can also enjoy the beauty of coordinated flowers and stroll through the pedestrian walkways with the option of eating the most delicious dishes in the restaurant Çamlıca Sosyal Tesisleri of the municipality with good services and prices.

8. Miniaturk Park- Turkey Within Your Grasp

On the banks of the Golden Horn of Istanbul, the famous Miniatürk Park has its unique features, with 122 of the most famous landmarks of Istanbul and Turkey being depicted as miniatures that mimic the original landscapes of Istanbul. 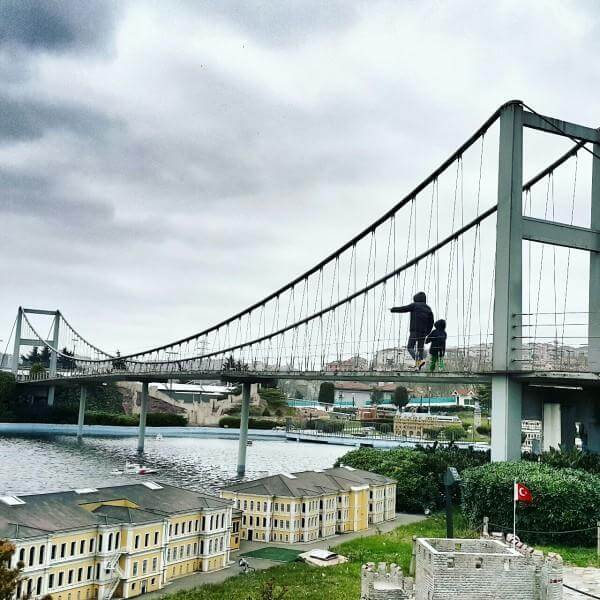 In addition to a voice-activated explanation that can be activated by passing a special card for each character in several languages such as Arabic, English, German and Turkish. 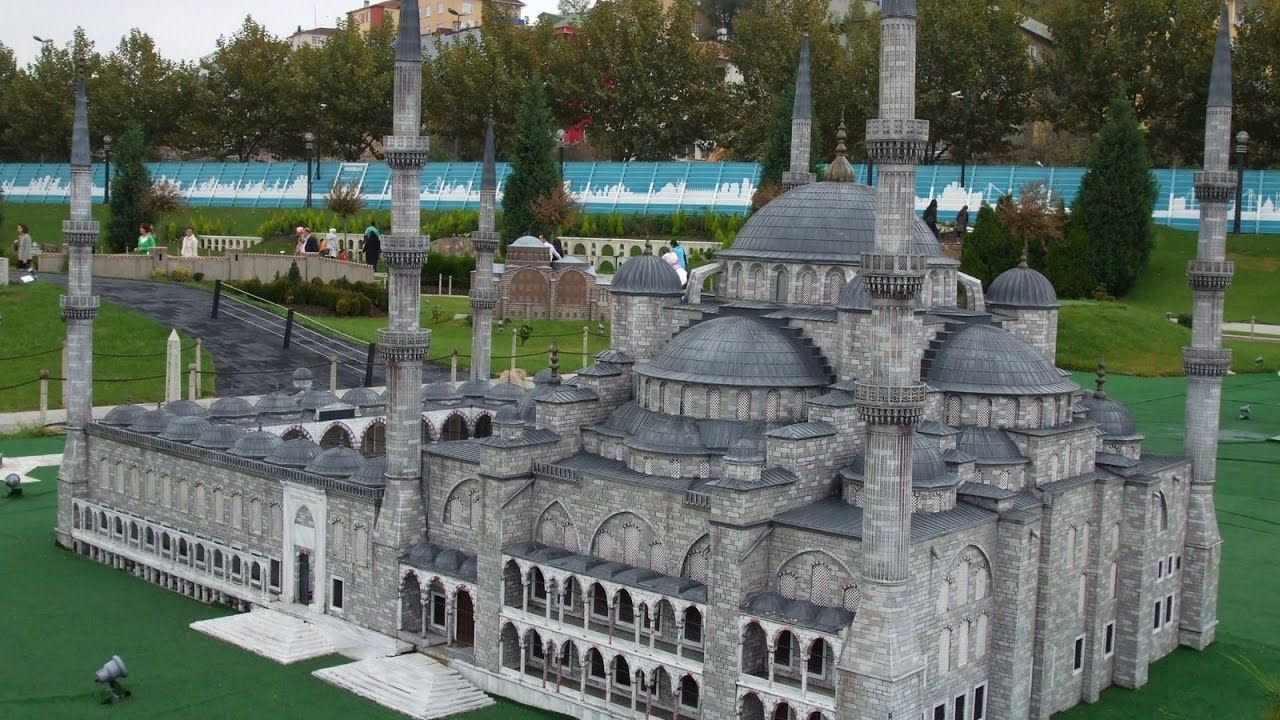 You will certainly enjoy wandering around the historical mosques of Sultan Ahmad, Al Fatih, the Hagia Sophia Museum, the historic ruins of the Rumelihisarı castle, as well as landmarks in Turkey such as the Bursa Grand Mosque in Bursa, the Jalaluddin Al Roumi Shrine in Konya, and the Izmir Clock Tower Mardin stone houses. 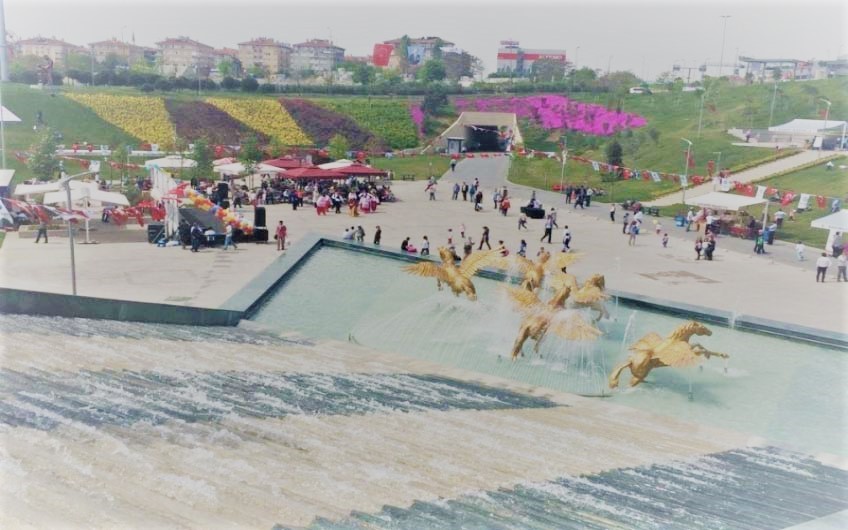 The botanical garden in Bakirkoy Turkey includes many fun activities for all and for children in particular. There are several sculptures of dinosaurs, water and sandy playgrounds for children.

As well as exquisite water formations flow on a gradient slope and pour to meet in a pool of winged golden horses in the very magnificence and splendor! 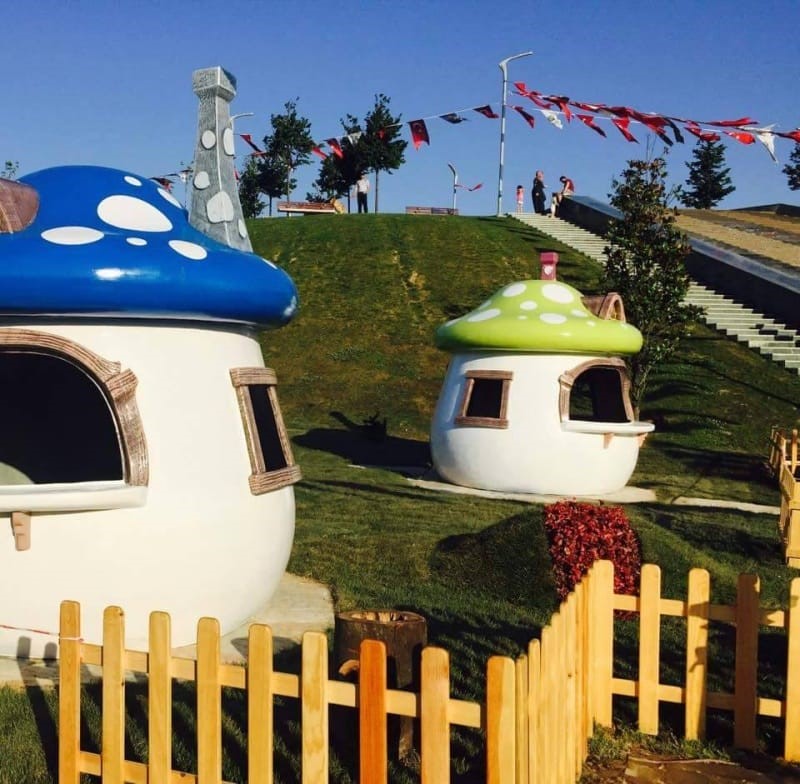 The garden also has a water-filled pond surrounded by trees and many turtles and birds swim in it. You can drive the boat on a nice tour of the beautiful lake.

You can also enjoy delicious dishes at the botanical garden restaurant on tables spread out on the edge of the lake with a magnificent wonderful view.

One of the most beautiful things that draw the attention of children in the garden is the small huts that mimic the houses of the Smurfs and the figures similar to their favorite cartoon characters, where you see children running to take memorial photos next to them at times, and jump around them at other times.

Life Valley Park or the Green Valley Park, as some call it, is a number of adjacent gardens that extend in large areas within the Beylikdüzü area near to the Sea of Marmara.

The park boasts a unique range of free children's games, as well as the spread of large, filtered water pools with large colorful fish.

From a wide range of gardens, you can see the beautiful Japanese garden with its traditional Japanese huts where visitors take pictures. 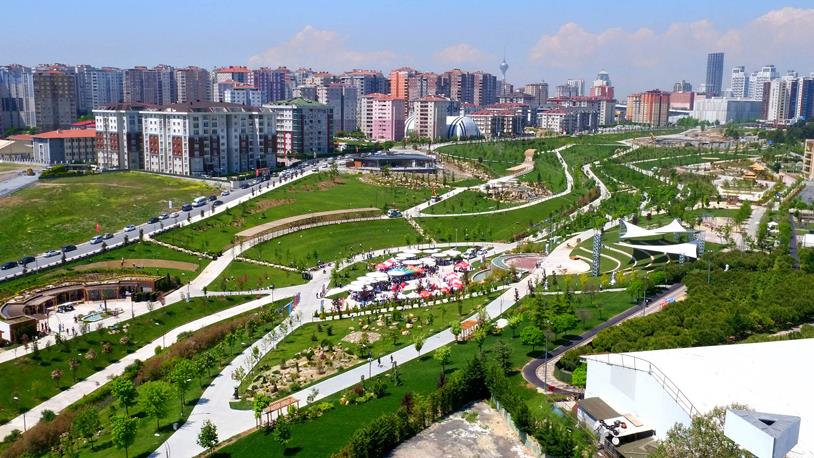 All this in addition to waterfalls and sparkling ponds and wonderful fountains, and statues of poets and artists and celebrities attract visitors from all over Istanbul.

If you are looking for a high-end life in Beylikdüzü, one of our most unique projects is Seashell Marmara project IMT-145, that overlook the Marmara Sea coast, and close to the E5 highway, the nerve center of Istanbul.

4,436
Search for your apartment