Over the past two decades, Trabzon has attracted tourists and investors from countries around the world and the Arab world in particular, because of the beauty of nature and moderation in the weather and climate.

What distinguishes infrastructure projects in Trabzon?

Infrastructure projects in Trabzon are distinguished as projects that made Turkey one of the most important investment countries at the present time because they are comprehensive and modern projects that are planned to keep pace with the needs of the modern era.

Actually, these pioneering projects have managed to gain advanced positions among their counterparts in other cities.

In Trabzon, there are projects related to the sectors of health, education, communication networks, transportation, roads, parks, water and sewage networks, and other projects that are important for the development of the city and its economic growth.

How have infrastructure projects developed in Trabzon in recent years?

Trabzon is planned to be one of the thirty most important cities in the world. The interest in infrastructure projects in Trabzon has increased in recent years. The public sector plans and implements huge comprehensive projects, and allows the private sector to participate in the development and expansion process of infrastructure. Trabzon has the attention of investors from all over the world in general and the Arab world in particular.

What are the most important infrastructure projects in Trabzon?

The Trabzon municipality worked on expanding and modernizing the infrastructure, establishing hospitals and schools, paved roads, expanding the old ones, and developing water and sewage networks, as well as communications. It had a share in this development, as it included areas in the city that were not previously covered by the means of communication.

Roads are transport hubs that connect countries to each other, and between cities within a single country, facilitating the movement of trade, tourism, and business.

The highways are characterized by the flatness of the lane and the wideness of it, which ensures the passage of a good number of transport vehicles on the same road.

The highways in Turkey have witnessed a renaissance with regard to their construction and development, and long tunnels have played a prominent role in this area, some of which penetrated the seas, and some of them shortened the distance between the mountains by thousands of meters. All this was done in the best way and in the best way to facilitate the movement of roads, transportation, and business in this beautiful coastal city.

The international roads (D010) and (E097) are the two most important roads in the city. As the road (D010) connects the city of Trabzon with the coastal cities together, and east to Iran, Georgia, and Armenia; while the road (E097) reaches the city from north to south through the states of Erzincan and Diyarbakir until it reaches the north of Syria. 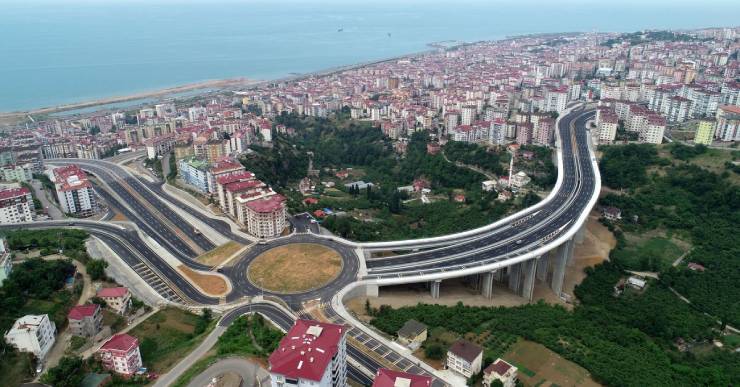 The airport is the first destination for the traveler or tourist, and it can be the evaluation of the city, for the most part, starts from the airport, so the airports were among the priority investment projects in each city.

The city of Trabzon, its ancient airport was established in 1957, with an area of ​​1,377,244 m². About 3.5 million tourists, investors, and residents travel through it every year, and it is only 6 km away from the city center.

Transport projects by railways are among the most important and fastest means of transportation contemplated and implemented by developed countries. Also, one of the important factors that contribute to the development of the infrastructure of any city: is the railway transportation network.

Among the vital and important strategic projects launched by the Turkish government in Trabzon this year is the (Şehir Hastanesi-Yomra) line, with a length of 31 km, a capacity of 2,400 passengers, and a length of up to 10 connected vehicles, passing through 57 stations to reach the Yomra area, Northeast of the city.

According to last year's statistics, Turkey dug about 567 km underground at a cost of $4 billion to develop the transportation sector and infrastructure. Therefore, neither the rocks of the mountains nor the depths of the sea made an obstacle to the infrastructure renaissance in Turkey. In the past year alone, 12 tunnels were opened, with a total length of 23 km.

Trabzon had its share of this with one of the most important road and tunnel projects, the Zigana tunnel project, which connects Trabzon and Gümüşhane with a length of 14.5 km, shortening the time by up to 45 minutes.

Turkey has paid attention to modernizing its communications network. It has launched eight multi-tasking satellites, developed landline, mobile, and Internet networks, and encouraged communication companies to invest in them.

From this point of view, there are three main companies that provide mobile phone service and fast internet, represented by (Turk Telecom, Turkcell, and Vodafone), as these companies compete with each other to provide the best services and the best speed and price offers. Internet lines subscription speeds start with 8 megabytes and go up to 100 megabytes.

Connections are characterized by high-speed fiber-optic cables in the city along the coast.

Recently, the internet companies in Trabzon are working to improve mobile internet service by keeping pace with the generations. After the second and third generations, the fourth generation network spread.

The most important home internet providers in Turkey are: (Turkcell, Vodafone, Turk Telecom, D.Smart, and Dopping)

The Ministry of Technology is constantly working on developing servers and modernizing information transmission networks to keep pace with development and to meet the needs of different sectors in Trabzon and other cities.

The basin of the Tigris and Euphrates rivers, which constitutes 28% of the water potential in Turkey, is the largest basin in terms of surface area and water potential.

Turkey is divided into twenty-five water basins, and most of the rivers originate from Turkey, and there are more than (120) natural lakes, (293) dams, and (1000) reservoirs for small dams, and the average flow in the basins is (186) billion cubic meters.

In the last five years, the Trabzon Municipality has been trying to renew and expand the water and sewage networks; to reach all new residential areas optimally.

Luckily, the Turkish school education system, in addition to high quality, offers a variety of options that can cover a wide range of science students.

Education in all its forms in Turkey takes place under the supervision of the country's Ministry of Education. The state provides free pre-university education and collects nominal premiums at its affiliated universities.

The school-age in Turkey officially starts from five. Before that, the child can go to kindergarten, and education is compulsory until the end of secondary school. Educational institutions are spread all over the city of Trabzon, hardly a small neighborhood is devoid of a school, institute, or educational institution.

The Trabzon Municipality has paid attention to private institutes and issued free educational endowments, in addition to the already available open education, which always seeks to increase its branches and expand its services.

Schools in Trabzon are divided into three sections: public, governmental, private, international, and international under the auspices of different countries, and the education system is the same in those countries.

As for universities, the higher education system in Turkey has developed significantly in terms of quality and quantity. Recently, seven Turkish universities entered the list of the top 100 universities, three of which are in the top ten list.

The Turkish Ministry of Education is interested in attracting international students to improve its university ranking. Therefore, the Turkish government gives many international scholarships to students from all over the world. Universities in Turkey follow the Bologna Agreement, and the higher education system ranks 43rd in the world.

Read also: Universities In Trabzon And Their Most Important Advantages 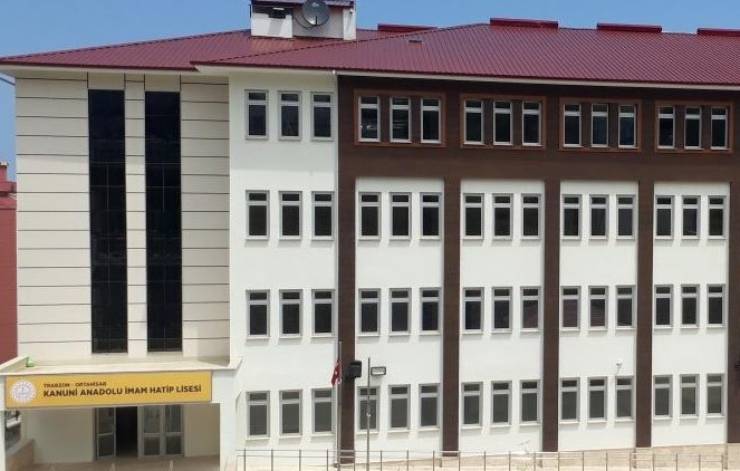 The city's health facilities (hospitals and clinics) are spread in every district and neighborhood, and the construction of more medical centers is still in progress.

There is Fatih National Hospital, Ahi Ifrane Hospital for Cardiology and Thoracic Diseases, Akçaabat Hospital, and many other governmental and private health centers. Sultan Suleiman the Magnificent Hospital is considered one of the largest and most modern hospitals in the city with its various departments such as internal, orthopedic, neurological, pediatrics, hematology, and more. 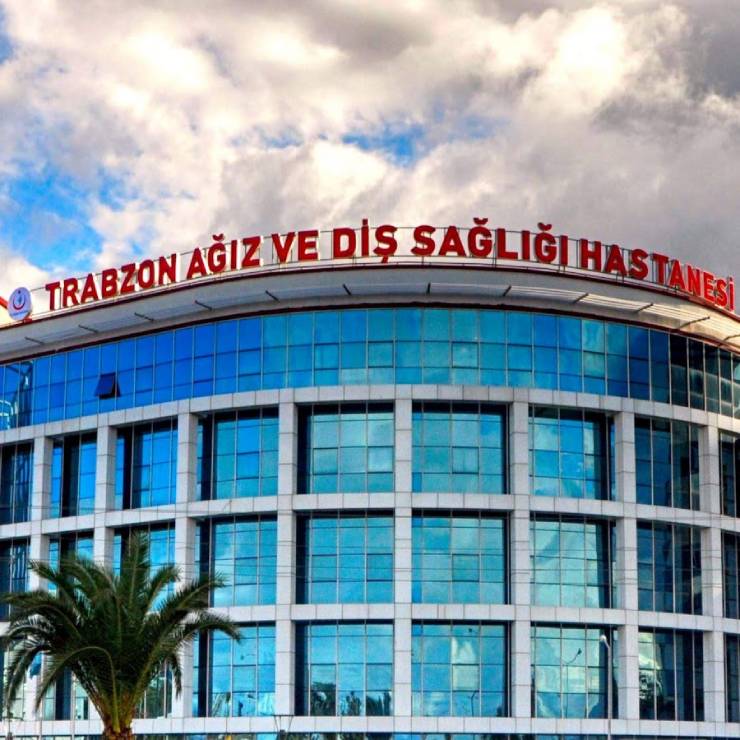 9. Services and facilities necessary for the economy

Services and facilities are necessary for every country that wants to develop; for economic development, there must be facilities that qualify every city to be in the highest ranks economically, and they include the above, in addition to providing housing in hotels or independent apartments, and banking services of all kinds, as well as facilitating all commercial and investment transactions.

What are the future plans for infrastructure projects in Trabzon?

The Turkish government is working on development in all states and cities but pays great attention to the city of Trabzon due to its location and its attraction to tourists. Therefore, infrastructure development plans are always drawn up, whether in roads and tunnels, in health care institutions and hospitals, in communications and the educational sector, and other things that are a basis for development.

How does the infrastructure in Trabzon affect the investment value of the city?

Whenever the infrastructure is available and developed, there is an incentive to invest, and a desire to think about establishing projects that benefit the city and the country as a whole, which increases the investment value in general.

Therefore, the standards for the high value of an investment for any city are the infrastructure associated with the development of sectors, and the high index of services in them, and this is what we find clearly evident in the city of Trabzon at the present time.

The best-serviced areas in terms of infrastructure in Trabzon

Trabzon Municipality is striving to expand the infrastructure services for the whole city, but at the present time, the areas: (Akçaabat, Arakli, Ortahisar, Macca, and Arsin) are considered among the infrastructure-served areas in the city, which are equipped for the construction of buildings, public facilities, and high-end residential complexes.

The best residential projects in special infrastructure areas in Trabzon

In the amazing tourist city of Trabzon, there are many distinctive projects that have a strong and comprehensive infrastructure. Perhaps the most prominent of them are the Star Residences project, the Trabzon Kanuni complex project, in the Akçaabat area, the Yasham Trabzon project, and the Marine City Trabzon in the Yomra area, as well as the Diamond Complex, the Palm Garden in Oratahisar, and other investment and residential projects that meet modern specifications luxury.

2,838
Search for your apartment