Ownership of Palestinians who were granted the identity from other countries

Ownership of Palestinians who were granted the identity from other countries

New legal amendments have been made to the real estate law in Turkey, which includes the ownership of the Palestinians those of documents holders in Turkey. These amendments are related to title deed transactions and transfer of property, and to the identification documents accepted in Turkey.

Under the new amendments, Palestinian documents holders can buy properties in Turkey under their travel documents issued by other countries. They can also apply for Turkish citizenship after buying property in Turkey worth at least $ 250,000.

The amendments issued by the Ministry of Environment and Cities, within the framework of the facilities provided to support the real estate investment in Turkey, by increasing the ownership of Palestinians in Turkey.

In response to the requests of our valued customers, Imtilak Real Estate has the exclusive right to provide an exclusive translation of the terms of these new legal amendments from its governmental source.

The Official Translation of Property Ownership Law in Turkey

Subject: Proof of identity in the procedures related to foreigners

Directed to: Tabu and Survey Real Estate Directorates in the regions

The Turkish State was in the process of studying applications for ownership of immovable property in Turkey for persons of foreign nationality and commercial companies licensed in accordance with the laws of those States of which they have legal entity after having been evaluated within the framework of the principles specified in the circular mentioned in the related law (a) regulated in accordance with Article 35 of the title deed Law No. 2644 dated 22/12/1934, which was amended by Law No. 6302 applicable from the date of its publication in the Official Gazette on 18/05/2012.

The Directorate General of the Tabu and Real Estate Survey of Turkey has been authorized to identify the documents to be submitted in Tabu and real estate survey transactions concerning real persons and commercial companies with a legal entity in foreign countries and in which were legally established. In accordance with article 18, paragraph 8, of the title deed Regulations of the Associated Act (b), entitled "Determination of the right owner".

Also in the last item of the general statement material registered in the related law (c) where it was decided to carry out the transactions with the General Directorate of Tabu and the real estate survey, by verifying the identities of the persons concerned with these transactions, By local Tabu administrations.

If the Palestinian nationality holder is submitted with the residence permit issued by the Directorate General of Turkish Immigration, the Turkish ID number for foreigners should be written in the field of the foreign identity number in the electronic transaction called TAKBİS (which can be obtained from e-Devlet, Tabu, and real estate survey).

If the TC number is not available, you must type the passport number or foreign state identification number.

If the document is written in non-Latin characters, the Tabu Directorate may request translation of identity card or foreign passport (amended by approval No. 1058120 dated 06/03/2019).

As for stateless persons (without nationality), they will use the Turkish residence card mentioned in the above documents: in the place of identity card or passport (under the amendment made by decision No. 1058120 dated 6/3/2019), and a special search and investigation of the personal identity of stateless persons, granted to them by the State Administration, will be conducted under article 50/2 of the Foreigners and International Protection Act No. 6458.

All blue cards, issued after the application of the "Blue Cards" system, by the Directorate of Civil Registration and Citizenship on 12/04/2013, can be used as an existing identity in their own right.

During the Blue Identity Renewal process, the identity of the foreign country or passport will continue to be assessed with the blue identity issued prior to 12/04/2013 under Law No. 4112/5203.

[... More details of the blue card holders transactions, of Turkish persons who have lost Turkish nationality].

3- As for the transactions of the title deed of foreign persons and foreign commercial companies classified as legal entities, according to the criteria of the countries to which they belong, documents proving the establishment of such a company should be submitted in accordance with the regulations in the country to which it belongs and these documents must be verified and that this company carries out its business activities, and they are eligible to complete the transaction on behalf of the company. These documents should be original, translated, ratified by Apostille type, in accordance with the Hague Convention of 5/11/1961, this agreement permits the non-ratification of official foreign documents. If there is no Apostille certification on these documents, a copy of these documents must be submitted by the Turkish Consulate in the country of origin.

This decision shall be circulated to all title deed (Tabu) and Real Estate Survey departments and must abide by what is stated therein. 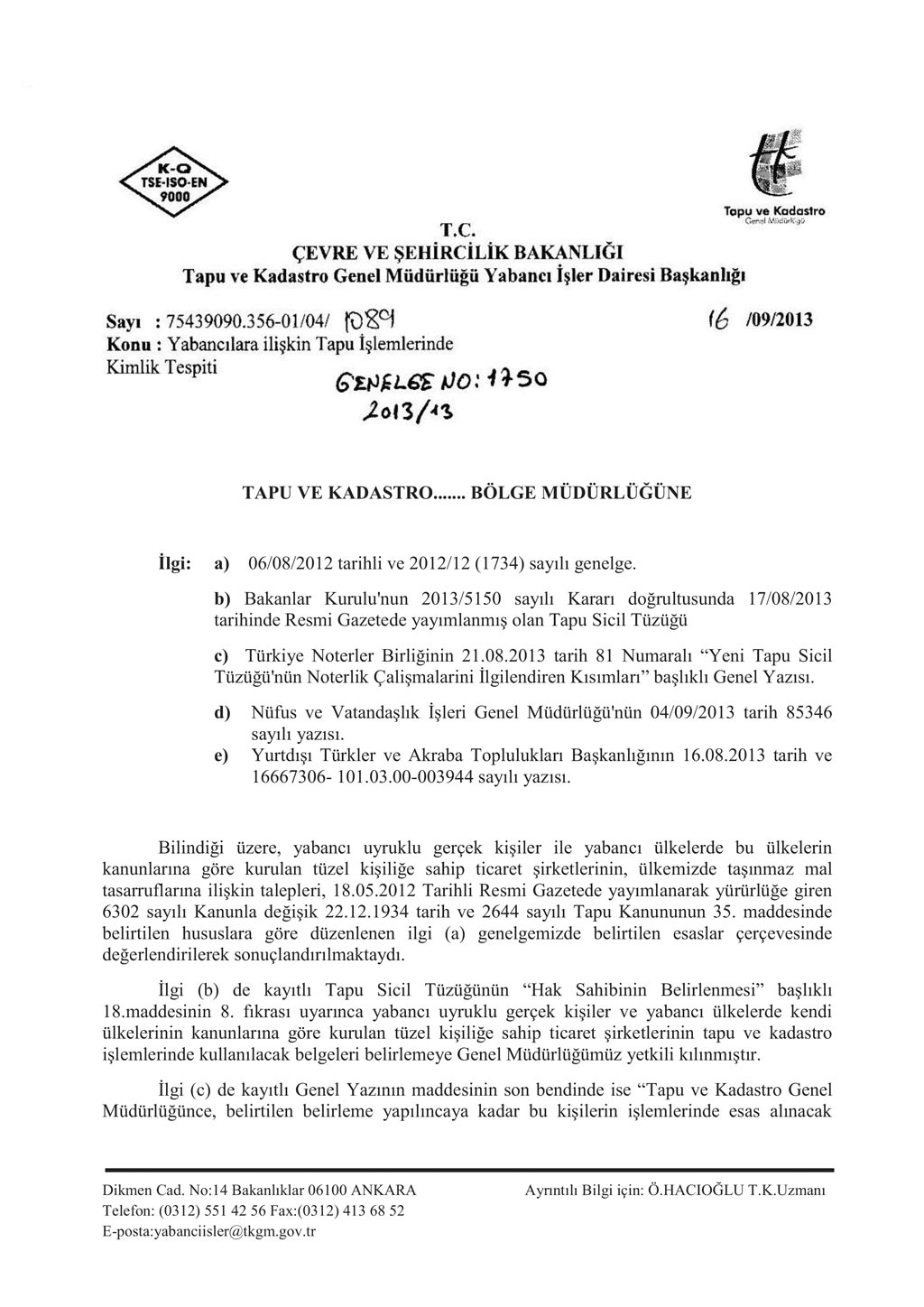 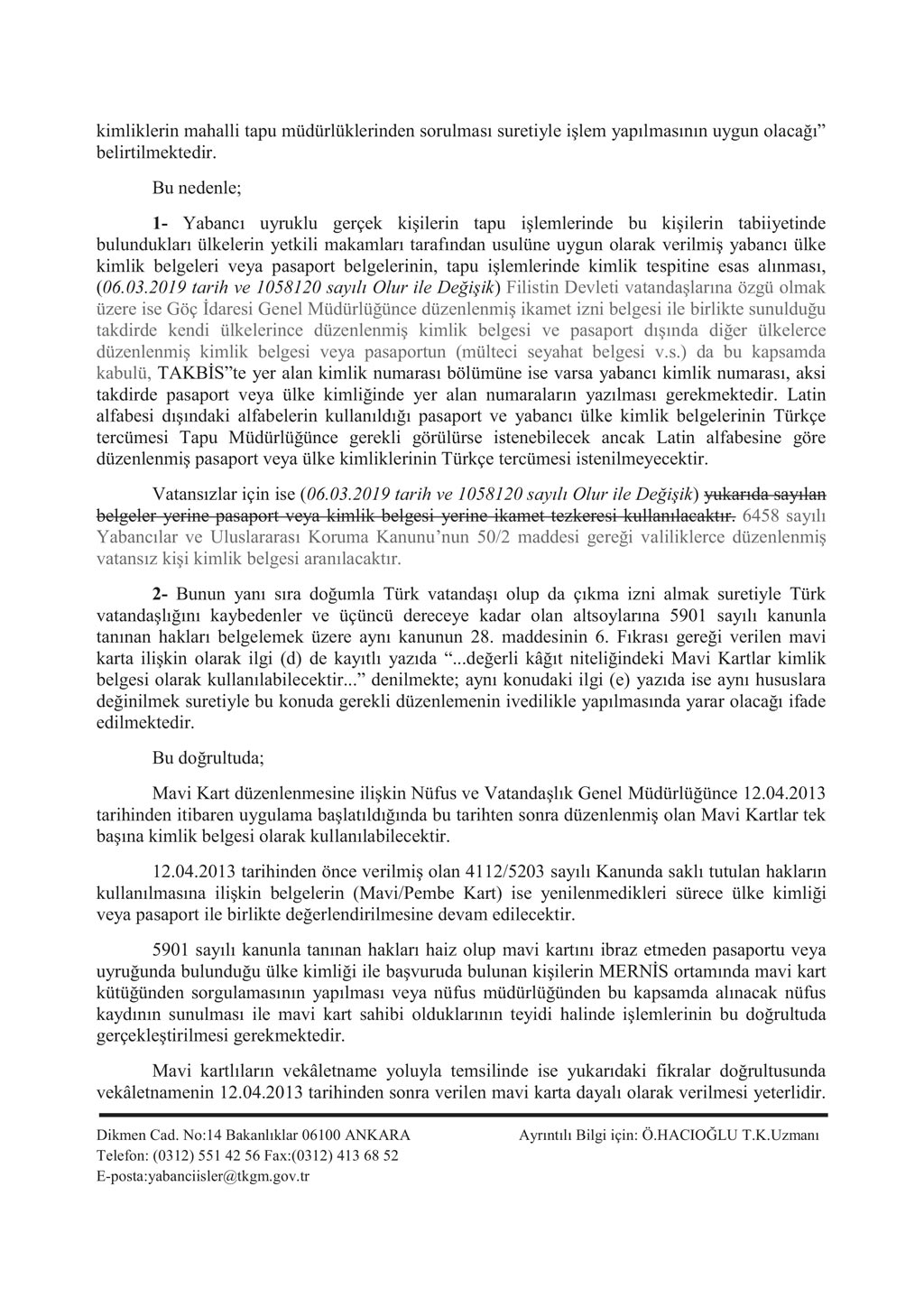 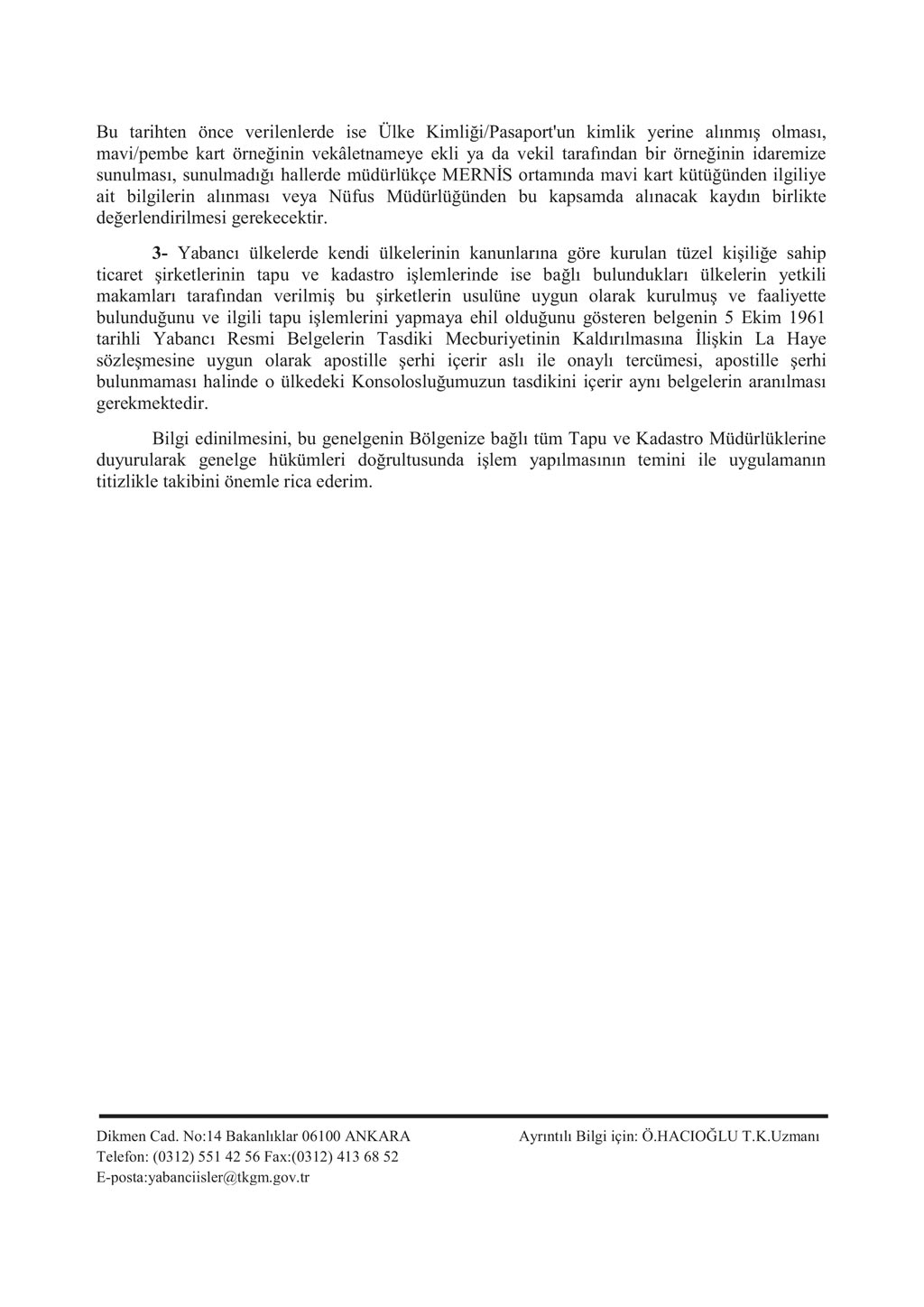