New Eminonu Mosque: Tales about the History of Istanbul

New Eminonu Mosque: Tales about the History of Istanbul

New Eminonu Mosque is one of the masterpieces of the sultans overlooking the seashore in Istanbul, and one of the most important symbols of the ancient city. The mosque is the last of the great mosques built by order of the Sultans of Bani Osman, taking the longest period of construction compared to these mosques.

The new Eminonu Mosque is located in the square of the Eminonu district of Fatih municipality, known as Istanbul's busiest area, where every day there is a tremendous crossing for citizens and tourists from all over the world.

The mosque is also known as the Mosque of the Sultan's Mother or Sultan's Mother's Mosque. The order was given to build the mosque in 1597 by Safia Sultan or mother of Sultan Mohammed III and because of the reluctance of the sultans who came after Mohammed III to complete the project and for other reasons; construction of the mosque has been paused.

The Sultan’s palace, which includes the mosque, is one of the finest palaces attached to the mosques built in the seventeenth century.

Although the name of the mosque is known to be new, this mosque, which has become a symbol of the Eminonu area, is now 500 years old. Its sixty-six-year of construction saw the rule of eight Ottoman sultans.

The fenced passage is a unique feature of the new Eminonu Mosque, a passage leading to the Sultan's Palace, and to the Bank Street on the Strait.

The inner courtyard of the mosque a place for ablution. The courtyard is surrounded by an arcade with 20 pillars above it, twenty-four dome.

Like many mosques, this mosque has lost its outer courtyard with its urbanization, while its three-door interior remains beautifully decorated with ceramic decorations.

The roof of the mosque has a 16-meter dome, which is built on four massive pillars, while the decorations fill the walls of the mosque from its floor above the second row of windows, but when compared to other mosques, they are of lower quality indicating the decline of this workmanship in that period. 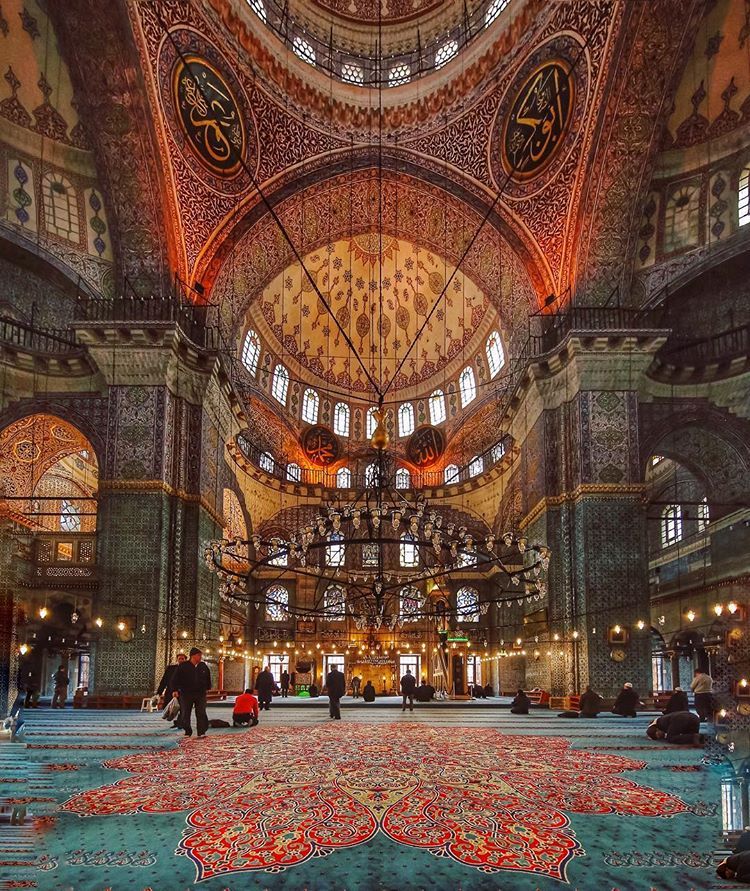 New Eminonu Mosque: How to reach it

To get to the mosque by public transport it is enough to reach Istanbul's Eminonu Square. Buses can reach the square from most of Istanbul's central points. You can also use the Bağcılar-Kabataş tramway and then get off at the Eminonu stop.

The best way to come to the square from the Asian side is to use the ferry, from Uskudar or Ortakoy.