Iraqis Ownership in Turkey: Everything you Need to Know

Frequently asked questions for the Iraqis about real-estate in Turkey...

Iraqis Ownership in Turkey: Everything you Need to Know

Can Iraqis buy an apartment in Turkey?

Can they buy lands in Turkey?

What types of real estate can Iraqis own in Turkey?

What are the required procedures for the ownership process?

Frequently asked questions about the ownership of Iraqis in Turkey, we review the answers in this article, and at the end, you can find new clip episode of the program "Real Estate is the best decision" entitled Iraqis ownership in Turkey Prepared and presented by Abdullah Al-Hammad CEO of Imtilak Real Estate.

The Nature of Iraqi - Turkish Relations

Iraq and Turkey are neighbors with historical, cultural and economic ties. The two countries have sought to develop their relations since the Turkish recognition of Iraq in 1927 based on their common interests, especially as these two countries share common borders and common issues such as water and oil.

On the economic level, the two countries are associated with large-scale trade relations in the form of Iraq's imports of Turkish goods in large quantities, making the crossing point between the two countries one of the most important commercial areas in which Turkish trucks enter Iraq on a daily and large scale. In contrast, Iraq exports its oil through a pipeline the oil flowing through Turkish territory, for the common benefit of Iraq and Turkey.

What Attracts Iraqi in the Turkish Real Estate Market?

The real estate market in Turkey is witnessing a high demand for apartments by Iraqi citizens, who make up large segments to boost real estate investment in Turkey.

Some unstable conditions in Iraq have prompted thousands of Iraqis to seek safe alternatives. Many of them have chosen to go to Turkey. Many Iraqis have decided to settle and own real estate in Turkey because of the reception, hospitality, and sympathy shown by Turkish society to Iraqi citizens.

Properties that Iraqi Citizens can Own in Turkey

Iraqis are entitled to buy most of the properties in Turkey, including residential properties such as Apartments, villas, along with commercial real estate including shops, offices, stores, hotels, and buildings.

With regard to the issue of land ownership, Iraqis have the right to own zoned land and, under Turkish law, they are not entitled to purchase agricultural land and uninhabited land.

The Growth of Iraqi Real Estate Investments in Turkey

Iraqis make up the largest proportion of foreigners who have owned real estate in recent years, with Iraqis making the list of the most property-owning foreigners in Turkey for 2015, 2016 and 2017. The number of properties owned by Iraqis in 2017 was 3,205, an increase of at least 20% to the previous year 2016. 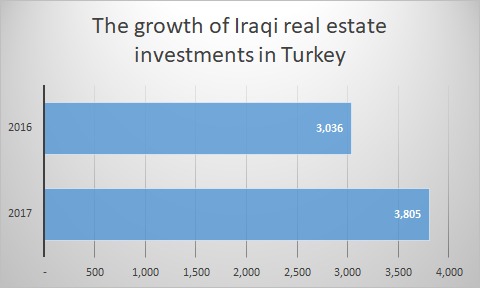 Iraqis remain on the top list of most property-owning foreigners in Turkey, in the first month of January 2018. 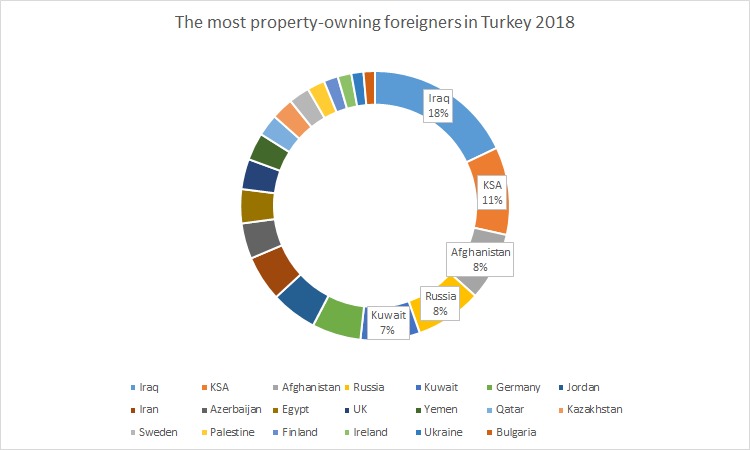 In order to complete the real estate ownership procedures in Turkey and the works of the title deed, the following are required:

1. Getting a tax number.
2. Translation of the passport into Turkish.
3. Ratification of the passport translated by the notary public or through the Turkish embassies abroad.
4. Two personal photographs.
5. Paying the fees of the title deed.
6. The presence of the owner or his official agent, under the submission of a notarized power of attorney to the notary, or through the Turkish embassies abroad.

You can see the rest of the episodes about the ownership of other foreign nationalities in this series, such as Palestinians, Jordanians, Yemenis and Saudis ownership.

the process of buying property in Turkey is not complicated if you can break it down into simple steps. And if you follo...

buying a property in Turkey is relatively cheap compared to other countries. If you want to have your own house or buy p...

Investment in Turkey
Top reasons to buy property in Antalya

Antalya is one of the most prestigious districts in Turkey and many foreigners want to buy property over there. Here we...