The Rich History of Suleymaniye Mosque in Istanbul

Süleymaniye Mosque is one of the most important monuments frequented by tourists in Istanbul, especially if we know that the mosque is one of the most important artifacts designed by the well-known Turkish architect Sinan. Sultan Suleiman Alkanuni had ordered to build it during the period of prosperity of the Ottoman rule as the constructions work begun in 1550, and was completed and opened for worship in 1557.

The Mosque of Süleymaniye is located on a hill overlooking the Gulf and the Bosphorus. It contains the tomb of Sultan Suleiman, his palace and the tomb of the architect Sinan. 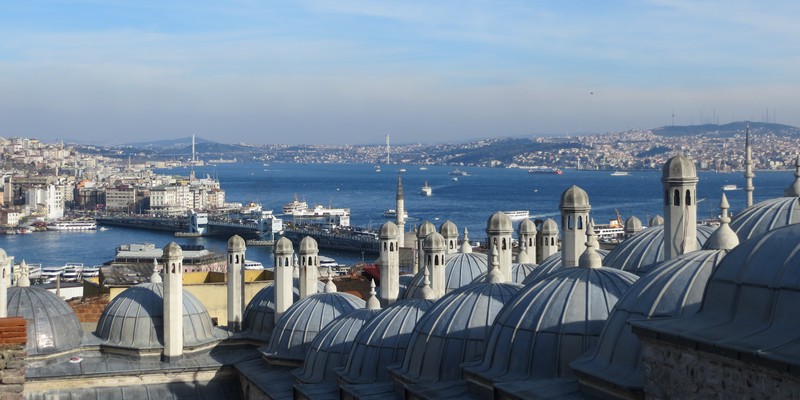 The Unique Architectural Design of Suleymaniye Mosque in Istanbul

Many of the most advanced architectural techniques have been used in its construction. Its structure is based on a hierarchical balance that makes its appearance harmonious from any angle you try to look at it.

It also includes four domes indicating the location of Sultan Sulaiman as the fourth Sultan who took over the Sultanate after the conquest of Istanbul. These minarets have balconies that indicate that he was the tenth Sultan in the Ottoman era.

The outside courtyard of the mosque is surrounded by a low stone fence, and from this fence, you can look at the most beautiful views of Istanbul, where the strait and the bay.

Although the Mosque is quite big, the simplicity dominates the interior. Perhaps the first thing to notice is its large dome, 53 meters high and 26.5 meters in diameter. It is the largest dome among the domes of historic mosques in Istanbul where it based on four pillars.

The pillars have been brought from Alexandria, Baalbek, and the Palace of Topkapi, and Fatih Kzatchi as mentioned in the book Tuhvet al-Bayan, It was also reported that the alignment of the cavities around the dome gives the mosque's atmosphere an attractive vocal tone.

The internal courtyard of the mosque is surrounded by an exquisite fountain. Twenty-four pillars with twenty-eight domes surround it as well, and the interior one has a beautiful main door, showing the magnificence of the old doors.

The mosque of Süleymaniye is located in the known area of Fatih in the heart of Istanbul. The hours of the visit to the mosque start from 9 am and end at 6:00 pm. Visitors to the mosque must pay attention to the style of their clothing in accordance with the sanctity of the mosque.

You can reach the Süleymaniye Mosque by means of public transport. The easiest way to reach it is to use the Haciosman-Yenikapi metro line. When you get off at the Vezneciler station on this line, you will walk on Süleymaniye Street for 10 to 15 minutes to reach the square where the mosque is located.

In addition, it can be accessed by tramway Bağcılar- Kabataş. When you get off at one of the two stops of Laleli or Beyazıt, you will reach the mosque after a 10-minute walk.