The most important tourist places in Izmit, Turkey

A detailed guide to knowing the most famous and most important tourist places in Izmit, and the value they add to the city, including museums, mosques, parks, archaeological sites, and palaces.

The most important tourist places in Izmit, Turkey

Where does Izmit derive its tourist value?

The importance of the tourist city of Izmit, which belongs to the state of Kocaeli in Turkey and is considered its capital, comes from the fact that it is a coastal city overlooking the Sea of ​​Marmara with its charming bay called the "Gulf of Izmit".

Izmit is also based on the ruins of the ancient Roman city of Nicomedia, which, in addition to its charming natural beauty, gives it a historical dimension represented by the historical monuments of the city that reflect the civilizations of several empires such as the Roman, Byzantine and Ottoman Empires.

Izmit is of great importance for its strategic location near Istanbul, where visitors of Istanbul can schedule Izmit on their tourist places as the city is only 100 km from Istanbul. It is possible to go to the city by car, a journey that takes a maximum of 1 hour and 45 minutes.

Izmit includes many natural and historical tourist places and attractions. It flourishes with its high-end hotels and beautiful restaurants, in addition to museums and natural places such as forests and picturesque lakes.

The most important and most famous tourist places in Izmit

Izmit is a major tourist destination for tourists coming to Istanbul, and tourism companies compete in operating daily trips to the city, and these trips vary in their popular programs for tourists, from enjoying the charming nature, mountain adventure tours, and others.

Archaeological and natural places in Izmit

It’s one of the historical attractions in Izmit, which is a Byzantine fortress overlooking the sea, and the history of its establishment dates back to 1241, and it was a garrison of the city and a fortress to monitor the enemy and take the task of protecting the city from any external invasion.

It is one of the distinguished tourist places in the Sapanca, Izmit, and it includes a snow resort for snow sports and snow skiing, and it also contains a cable car, and many cottages and high-end hotels in the arms of charming nature.

A historical tower located in Izmit with a height of up to 24 meters, where the tower provides a beautiful view of the Gulf in the Marmara Sea. Its construction dates back to 1901, the tower was built among a group of clock towers built in Turkish cities on the occasion of the commemoration of the ascension of Sultan Abdul Hamid II's throne.

Read also: A Guide On Living In Izmit, Turkey And Its Costs

It’s one of the Turkish National Museums, where artifacts from various historical eras are displayed. The museum was a train station center, but it was later converted into a museum.

It was originally a military building that constituted a military barracks for reserve officers in the Ottoman army, and the place was used until 1999 as a military court until it was opened as a historical museum displaying many historical pieces such as weapons, and military tools and others.

● Museum of the artist Ali Effendi Palace of Ethnography

A palace that dates back to 1774 during the Ottoman era, and is characterized by its direct view of the Marmara Sea, and includes many decorations, historical paintings, and artifacts.

The first and largest paper museum in the world, the Industrial Heritage Museum, is an old Turkish paper factory, which displays old paper machines and production lines, in addition to equipment, paper documents, and photos that are displayed in the museum.

It is one of the public parks located by the sea, extending over an area of ​​580 acres, and containing more than 6000 trees. The park is famous for its restaurants and cafes overlooking the Marmara Sea shore, in addition to children’s games and climbing activities on the 8-meter-long climbing wall. 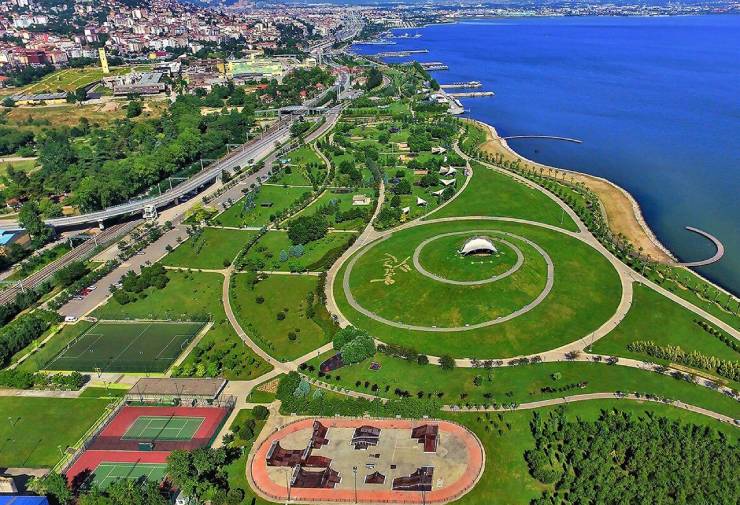 A national reserve in Turkey, characterized by its diversity of plants and animals, the park includes one of the largest concentrations of natural bees in a valley in the region called Bee Valley so that the type of honey called natural rock honey is produced.

It is one of the natural forests in Izmit, which is famous for its active camping and overnighting and is characterized by its high and dense trees, and a diversity of natural plants and wild animals.

It is one of the distinctive nature reserves in the state of Kocaeli and the city of Izmit. It includes five-star cottages, where you can stay and enjoy in the heart of charming nature. It includes springs and streams that pass between trees and plants to form a wonderful painting.

It is famous for its natural pine and oak trees and includes a restaurant and barbecue places, in addition to horse riding in the garden, due to the horse stable in it.

One of the architectural masterpieces of the famous Ottoman architecture, Mimar Sinan, where the mosque was designed by him, is one of the historical mosques in the state of Kocaeli.

The mosque was built in 1523 during the era of the Ottoman Empire and is one of the important historical mosques in the state of Kocaeli.

The mosque was built on the instructions of Prince Ghazi Suleiman Pasha in 1332, and he named it Orhan after his father, Gazi Orhan Pasha.

Its name is from the Ayazma Palace located next to it, its construction dates back to 1760, and the mosque is located in the heart of Izmit.

Today, Imtilak Real Estate offers many real estate projects in izmit and opportunities with a good investment return through the company’s branch in Kocaeli, and its real estate team specialized in the real estate market in Izmit. The details are explained and the customer is informed of all aspects of the purchase process and profit margins through your communication with your real estate advisor in the company, through any appropriate means of communication

The value that tourism adds to real estate in Izmit

Tourism gives cities a promising investment value, linked to the active movement of tourists, and the services they need related to accommodation and places for shopping, restaurants, and entertainment, which leads to high rates of demand for real estate in those areas, which increases its investment value.

Therefore, Izmit in the Turkish state of Kocaeli is one of the most important cities with good investment value for its real estate, because it is one of the tourist cities that enjoys an active movement of tourists from outside or inside Turkey.

Prices Of Apartments In Izmit, Turkey In 2022

Kocaeli City
Transportation in Kocaeli, Turkey: its types and the most important features

Your guide to universities in Kocaeli and their effective activities for students in terms of training and science. Lear...