Halal tourism in Turkey has witnessed a remarkable boom in the recent period, due to the highest international standards at affordable prices for holidays in a favorable environment

Halal tourism in Turkey is growing, with a deluxe hotel in Antalya with a spiral staircase, glass lifts, and huge chandeliers, while the lavish reception is a central patio with seating, shops, and water fountains.

Such hotels are typical of the new version of beach hotels that have become popular under the name of halal tourism in Turkey.

Halal tourism has become a commitment to the tourism sector in countries such as Turkey, where a large number of Muslim tourists visit.

The hotel's restaurant serves the best halal food as well as desserts and salads.

Wome Deluxe Hotel also includes separate pools and is equipped with a chapel and covered beaches for women.

Alcohol is excluded from recreational activities, where more than half of European Muslim guests are from France, Belgium, Germany, and the Netherlands, including first-generation Muslim immigrants. 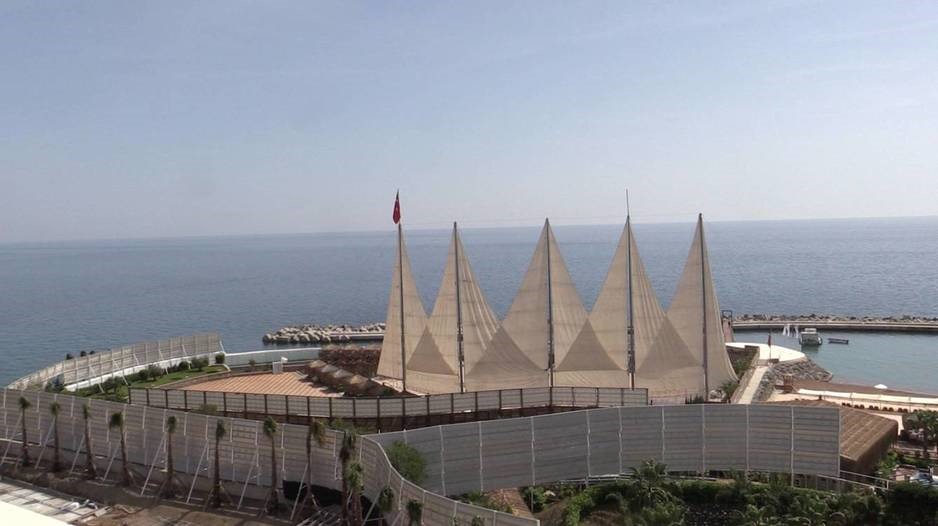 Wome Deluxe Hotel spans 120,000 m2 on the Turkish shores of Antalya. Of approximately 800 customers currently staying in the hotel, about 550 came from European countries according to the director of the luxury hotel, Youssef Gerchker.

During the past year, hotel bookings in this category were in the range of 30% and during this year, this rate is about 60%.

If we want to study the economic feasibility of halal tourism in Turkey, the number of Muslims is estimated at 1.8 billion worldwide.

Some estimates suggest that by 2060, the number of Muslims in the world will increase by 70%, making it a quarter of the world's population.

In light of this situation, the European travel agencies saw the opportunity to provide special services to this category of tourists, and accordingly, they have entered into a race of discounts in the field of halal tourism.

Mohamed, an owner of a travel agency in Paris, noted that the reason for the cuts and interest in halal tourism was the frequent demand for such tourism.

However, in 2017, about 10% of travel agencies' customers went to Halal destinations, and this year it is expected to be between 30% and 40%.

Ufuk Sechkin, marketing director of HalalBooking.com, the number one platform in the industry, explained that the choice of halal tourism coincided with the emergence of a new social class of Muslims, a new generation fully aware of the choice of halal services. This generation keeps pace with modernity, making online bookings, and searching for various platforms for vacation destinations.

He also confirmed that around 35,000 users have used the Halal bookings platform over the past year.

This figure is expected to double this year and to double annually over the next five years.

“I have traveled to Turkey because I want to see this new and increasingly popular model of halal tourism, “Asia Jabbari, director of travel agency Atlas Minara in Madrid added.

According to a study by the Thomson Reuters Foundation, Muslim travelers spent about $ 151 billion in 2015, of which $ 24 billion went to halal tourism destinations. Overall, these businesses are profitable for Turkey.

Halal tourism in Turkey: respect for privacy and rejection of intolerance

We want to travel to a Muslim country because it is very important for us. We know that this type of hotel will respect our culture and we will be able to swim and enjoy the company of our children without fanaticism or prejudice ... A female guest at the hotel talked about halal tourism in Turkey.

Farida is one of the guests who came to this place for the first time for a holiday in Halal Environment.

This woman considers that her experience is very satisfactory, especially in terms of costs, where she estimated the cost of her stay for nine days with her husband and two sons at only 750 euros! This is, of course, exceptional because there are discounts.

Tired of being categorized as a minority in their own country, these European citizens turned to Turkey, which for them is an Islamic environment for their holidays.

Last year, in France, they prevented us from wearing a modest burkini, so we cannot go to the beach after we have been forced to wear certain swimwear to spend a good time. She added.

Taiba, an English woman, said she was uncomfortable in the UK because all people stare at her just because she wore hijab. On the other hand, in Turkey, which is predominantly Muslim, she feels that everyone is more understanding.

For her, however, the concept of a private beach is a sign of sophistication and gives the place a unique character that only five-star hotels have.

Women wear modest swimwear, and smoking and alcohol are banned, making the place quiet and relaxing.

Mohammed Hayat, who comes from Crosby in the UK with 15 members of his family, is betting on this tourist destination. There is no need to worry about anything, as women have some privacy.

Furthermore, Turkey saw the highest sales of real estate to foreigners in its history, breaking a new record, in the first half of 2019, an increase of 68.9% compared to the same period last year.

According to observers, Turkish citizenship was an additional incentive that led many foreign investors to own real estate in Turkey, especially after the facilities launched by the Turkish government in this area in terms of easy procedures and a short time to resolve the procedures of citizenship.