Information about Trabzon and the most famous tourist places in it

Information about Trabzon and the most famous tourist places in it

The beautiful Uzungol Lake and the other landmarks of Trabzon remain a popular destination for many Arab tourists, who have found in these charming places a charming nature and pure air.

However, the state of Trabzon is very rich in its wonderful tourist areas that may not be known to many, which prompted us to write this article to serve as a guide can be used as a reference for anyone wishing to know more about the wonderful Trabzon. 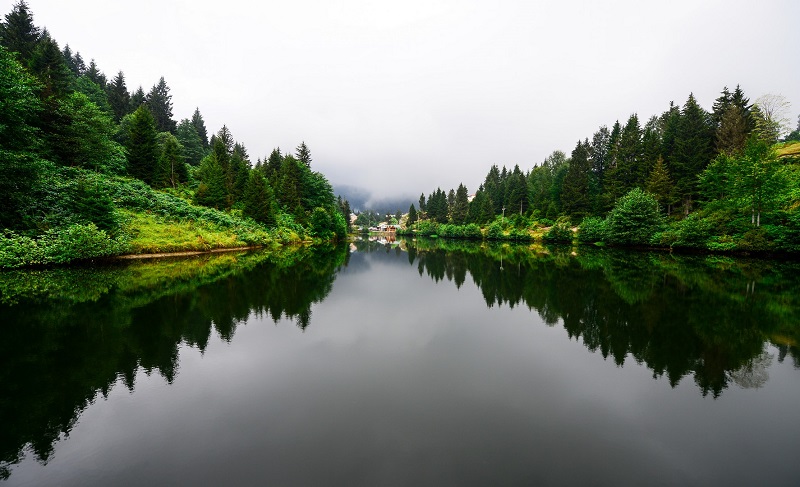 General Infromation About Trabzon in Turkey

Where is Trabzon Located?

Trabzon is located in northeastern Turkey, on the Black Sea coast, on the historic Silk Road, where Trabzon was a commercial gateway to Iran and the Caucasus.

Trabzon was an important point of reference for navigators in the Black Sea in adverse weather conditions, and the famous term "Trabzon lost" is still widely used in the Italian language to describe the loss of direction during navigation.

The Rich History of Trabzon

Trabzon’s history dates back to the 8th century BC. The ruins of this city tell the story of the civilizations that passed through it. It was ruled by Greece, then by the Romans and then Ottoman Muslims, when the Ottoman Sultan Bayezid II opened it. His son (Sultan Selim I) was appointed ruler of Sancak Trabzon. 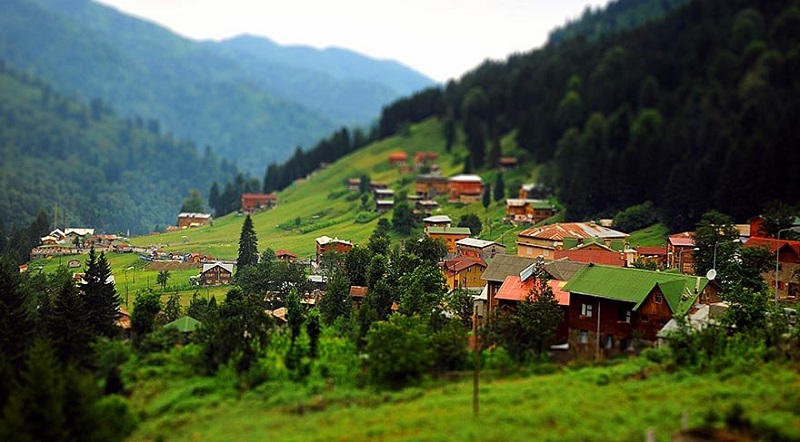 The climate in Trabzon is characterized by the high rainfall intensity of the Black Sea climate. Which is warm and humid in summer, and the August average temperature of 26.7 ° C, cold and wet, the minimum temperature in the center of the city in January is about 5 °C.

Snowfall in Trabzon is usually between December and March, it lasts for a week or two sometimes, and precipitation may be heavy at the beginning.

In our article, we divide these tourist attractions in Trabzon by proximity to and from the city center.

This mosque is located in Ortahisar, on a hill overlooking the sea. The mosque of Ayasofia Trabzon was built in 1461 and was considered a symbol of the opening of Trabzon. In 1961, it was transformed into a museum officially and remained until the re-opening for worship in 2013.

The walls of the mosque contain old pictures and decorations, Moreover, thousands of tourists visit the mosque every year from all over the world. 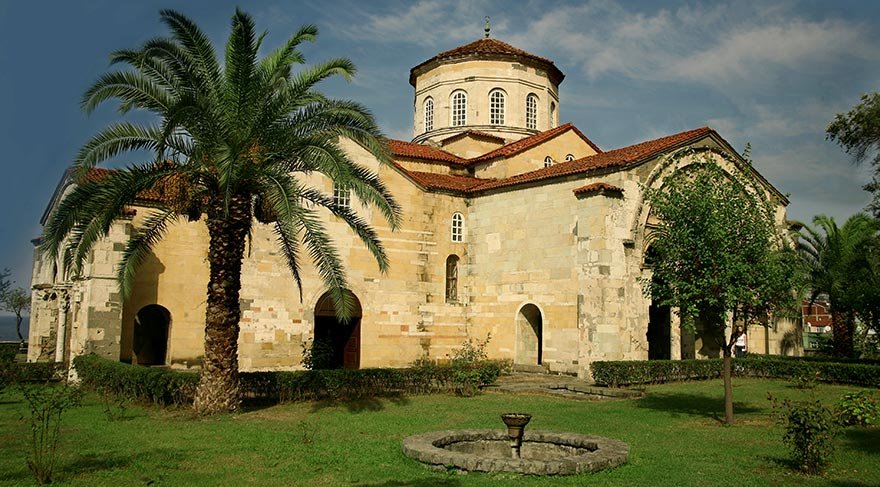 This palace is located 5 km from the center of Trabzon. it was built by Greek architect Constantine Capajiandi in 1903, in a style similar to that of the Black Sea buildings in the Crimea. It was built of three floors, on a hill of the Trabzon Hills and, when Ataturk visited the city in 1937, the royal family gave it to him.

The transformed palace is into a museum is distinguished by its beautiful architecture, marvelous gardens and antique furniture that was used in the early 20th century.

The palace is open for visitors from 9 am to 7 pm. 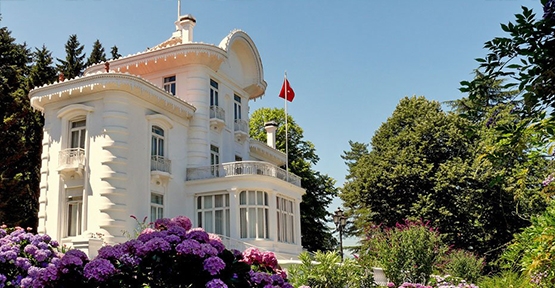 A decorated palace from the early 20th century. It includes antique and ethnographic exhibits from Trabzon animal statues and the professions of its people; the formulation of gold and other jewels, the types of grains, flowers, and plants in them, as well as statues of the customs and traditions of the people of Trabzon and some types of machines used there.

The museum is located on Uzun Street in Trabzon and is open to visitors from 9 am to 6 pm.

Ottoman fortress located in the city of Trabzon. The castle was built on bases dating back to the Byzantine Empire, with stones from the former historical structures on the site. The castle stretches from a hill overlooking the city to the Black Sea coast.

The castle consists of three parts: the upper castle, the central castle, and the lower castle. Its distinctive Ottoman architecture, scenic nature, and dense green trees also characterize it. 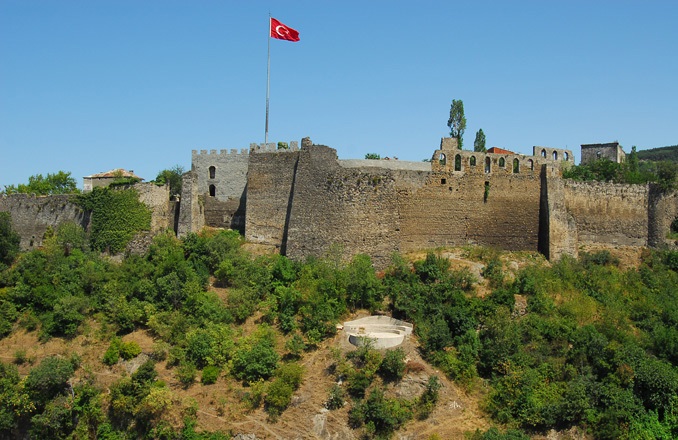 One of the beautiful lakes of Trabzon, with a range of mountain-slope streams.

The lake is just 12 km from the city center, set amongst a cluster of dense green mountains, this lake is a convenient place to relax and enjoy nature, next to the city center. 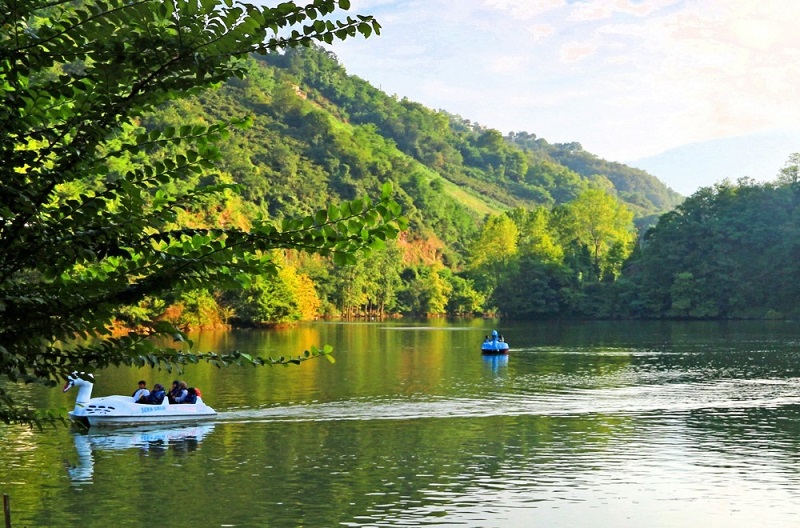 Uzungol Lake is located in the south-eastern part of Trabzon on the foothills of the Soganli Mountains in the Çaykara district of Trabzon province in northeastern Turkey on the Black Sea. The lake has been named after a village on the lake shore. Over the years, the lake has gained a lot of popularity and attracted many tourists from around the world. It is about 99 km away from the center of Trabzon city center, and about 19 km from the center of Çaykara. The lake was formed about five centuries ago when the Hellen dam blocked the flow of the Haldinese River. 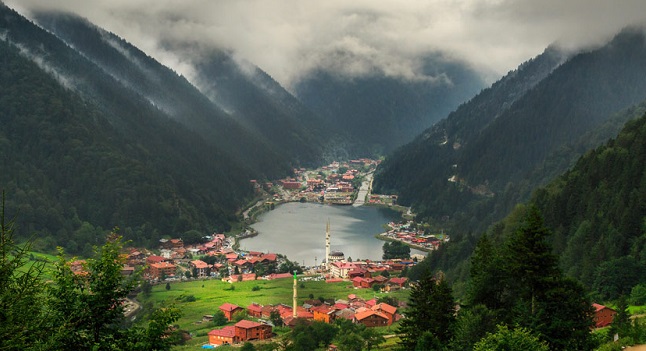 The Sumela Monastery is located in the Makkah region of Trabzon, in a forest called Tundra, on a slope that rises from the sea level 1200 meters (3900 feet), specifically within the range of the famous Pontiac Mountains. Its view gives excitement. The monastery is located in the middle of the mountains on a high slope. It is located about 50 km from the city of Trabzon. The monastery consists of 72 rooms, spread over five different floors, where there are chapels, kitchens, study rooms, guest accommodation, a rock church, a library and a holy eye for the Greek Orthodox. As well as an irrigation water system which is characterized by its brilliant colored arches that have been recently set up.

The monastery is open to visitors daily between 9 am and 4 pm. 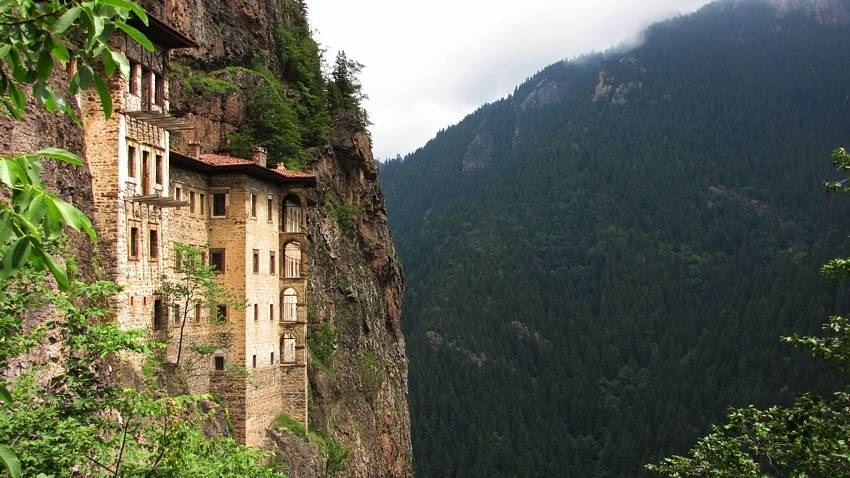 Sultan Murad Heights is located southwest of Trabzon, in western Turkey. It is about 75 km away from Trabzon and 35 km from Uzungol Lake. It is located on the highest mountain slopes in the region and prayed with his army the Friday prayer, therefore, it was called Yayla Sultan Murad. The Sultan Murad Heights can be reached from Uzungol via the coastal road and before the Uzungol road, 2 km from Chaikra, the road is paved with asphalt at its beginning but will be narrow in its end. Despite all this, you will be amazed by the stunning natural views. 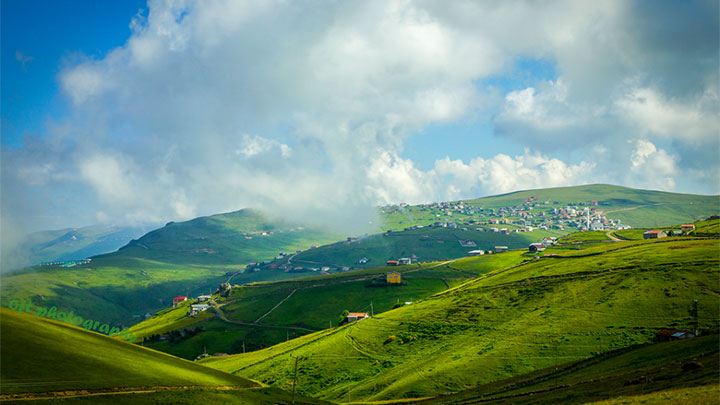 The second longest in the world in terms of length and the discovered passages reached about 8 km.

The cave is located 47 km from the center of Trabzon.

Water percentage in the cave in the summer drops to 25 cm, while in winter it reaches 1.5 m.

The cave opens its doors to visitors in 2013. Visitors are allowed to walk within 1 km of the cave. The cave contains a clean airway, which has positive effects on asthmatic patients suffering from respiratory distress.

The cave is one of the most beautiful tourist attractions in Trabzon, which is not complete without visiting the city and enjoying the splendor of Allah's creation. 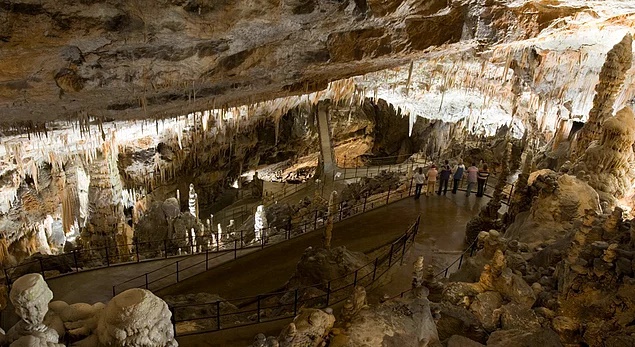 10. The Facinating Hidirnebi Plateau in Trabzon

One of the most beautiful areas of Trabzon, where the height of the plateau reaches 1600 meters and is characterized by beautiful nature and good tourist facilities.

The plateau is about 55 km from the center of Trabzon. It is famous for its unsurpassed beauty, with fog, rain, green pastures, meadows, springs, and lakes, such as Lake Fish.

Clouds touch the Hıdırnebi mountain peaks, in a view that enchants the eyes, and the region is characterized by cold weather to cool in the summer. 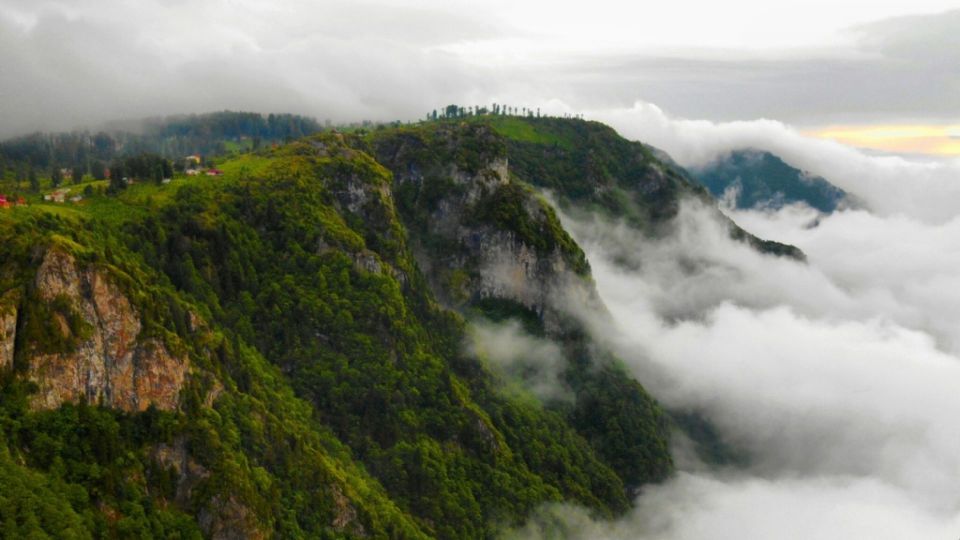 One of the most beautiful areas of Rize in the state of Trabzon enjoys the enchanting natural beauty and wonderful waterfall that fascinates tourists, with vast expanses of dense forests and high mountains that give the village splendor and beauty.

Aydar is known for its water baths and sulfuric water, as well as kayaking in the river that connects it to the city of Trabzon. 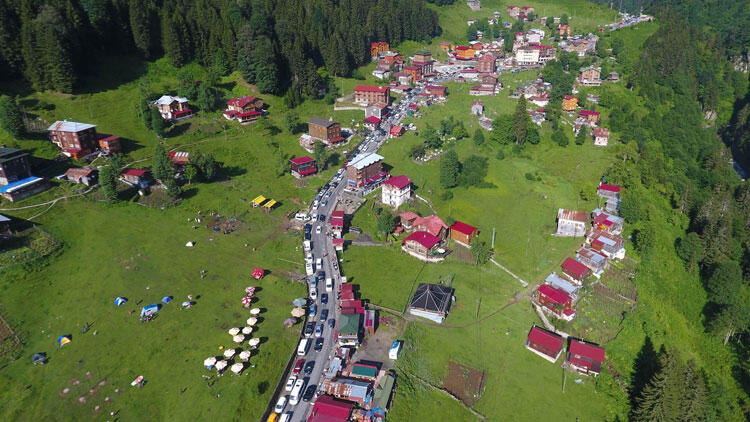 The village of Hamsikoy is one of the most beautiful areas of Turkey, especially for skiing enthusiasts; the snow is heavy during the winter and the mild weather in summer.

Finally, we invite you to get to know more and more of these landmarks and attractions multiple options from Safaraq Travel, to see our most important tourist activities in Trabzon and other cities of Turkey.

We are pleased in Imtilak Rael Estate to offer you the best real estate services in real estate investment and real estate consultancy in Trabzon and all the cities of Turkey. 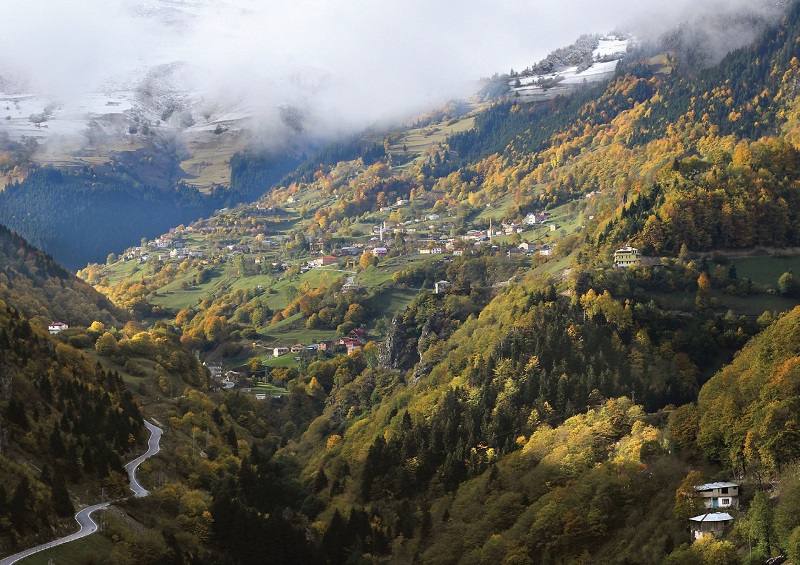