The best tourist places in Trabzon

There are many tourist attractions in Trabzon, including museums, parks, lakes, and historical monuments. Here is a guide to the most famous tourist places in Trabzon

The best tourist places in Trabzon

The tourist value of Trabzon

The tourist value and the exceptional position that has characterized Trabzon in recent years in particular, and the intensity of the turnout of Arab tourists, in particular, to visit it and enjoy its unique landmarks and luscious green nature.

We dedicate this article to talking about 30 tourist attractions that our memory of this radiant city has brought up with beauty and tranquility.

● Tourism in Trabzon in the winter

Snow falls in Trabzon and on its heights, usually between December and March, and snowfalls sometimes last for a week or two, with good intensity.

The winter of Trabzon is characterized by being cold and humid, and the city receives good rainfall even outside the winter days. The minimum average minimum temperature in Trabzon city center in January is about 5 degrees Celsius.

Many people and tourists prefer to visit Trabzon in winter because of the lower pressure on its tourist facilities during this season, and the low cost of tourism as well.

● Tourism in Trabzon in the summer

The weather in Trabzon is characterized by the Black Sea climate. It has a warm and humid climate in summer, with an average maximum temperature in August of 26.7 degrees Celsius. Summer is one of the best times recommended to visit Trabzon, due to its pleasant weather during it. 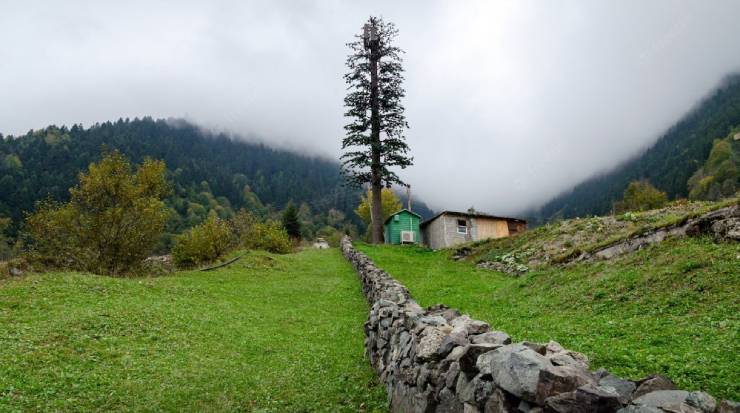 The most important and famous tourist places in Trabzon

We divide our conversation here according to tourist places, museums, parks, lakes, and shopping malls, and we conclude by talking about the famous Trabzon Heights:

We mention the most important of them:

The castle is located in the center of Trabzon, and it is an Ottoman fortress on a hill overlooking the city all the way to the shore of the Black Sea. The castle was built on foundations dating back to the Byzantine Empire, using stones from earlier historical structures.

The castle is divided into three sections, the upper, middle, and lower castles. It is characterized by its view of the coast and its beautiful nature.

Sumela Monastery is one of the most important tourist sites for lovers of history and beauty, as it includes a group of houses and a maze of rooms. The monastery is built strangely as if it were part of the mountain at a steep slope, and below it, a narrow valley, and enjoys a charming view of the forests and green mountains.

Sumela Monastery was built in 386 AD, 48 km south of Trabzon, in a privileged location at an altitude of 1200 meters above sea level, on the slope of a mountain overlooking the neighboring Maçka region.

The cave is located 47 km from the center of Trabzon. It is the second longest cave in the world and the length of the passages in which they were discovered reached about 8 km.

The cave is known for its limestone rocks with stalactites and stalagmites formed over hundreds of years, lakes with small waterfalls, and a very beautiful waterfall at the door of the cave, covering its gate.

Çal Cave was opened to visitors in 2013. It is allowed to wander within the first 1 km of the cave, and the cave contains a clean airway, which has a positive effect on asthma patients and those suffering from shortness of breath diseases.

We mention the most important of them:

A sports museum that tells the story of the sport's history of Turkish sports teams, and the museum displays all the awards won by the famous Trabzon team and all the information about it. The museum also includes some of the players' belongings, their clothes, and the footballs that the team played in their important matches.

It’s a historical museum, in the house where the Fifth President of the Turkish Republic: Cevdet Sunay, born in 1900, lived and grew up. The house was restored in 1982 and opened to visitors in 2001 under the name Cevdet Sunay Museum, where some of his personal belongings are displayed.

It is a mansion located only 5 km from the Trabzon city center. It consists of three floors, on the hills of the city. When Ataturk visited Trabzon in 1937, the royal family gifted him the palace, to be converted into a museum later.

The palace was built by the Greek architect Constantine Kapaginidi in 1903, in the style of the Black Sea buildings in the Crimean region. The palace includes beautiful gardens and antique pieces of furniture that were used at the beginning of the twentieth century.

The museum is located on Uzun Street in Trabzon and is an ornate palace built in the early 20th century. The museum includes archaeological and ethnographic exhibits of the local area, such as statues of animals that lived in the area, and other collectibles interested in the professions mastered by its people; including goldsmithing and others.

It’s a historical mosque in Ortahisar district in the center of Trabzon, on a high hill overlooking the Black Sea. Its walls contain old pictures and decorations, and it is visited by thousands of tourists annually from all over the world.

The Hagia Sophia Mosque was built in Trabzon in 1461, on the ruins of an abandoned church, and was considered a symbol of the conquest of Trabzon. Then it was illegally converted into a museum in 1961, and it remained in this state until its reopening for worship as a mosque in 2013.

A museum and cultural center located in the city of Trabzon, which includes a collection of tools of life in the Ottoman era in the 14th century, within an important era of the Ottoman Empire, especially during the reign of Sultan Suleiman the Magnificent.

The most beautiful gardens of Trabzon

It’s a quiet and elevated garden in its location, characterized by its wonderful design, and elegant arrangement. It also includes a place equipped with children's games, and the garden is famous for its various flowers with a panoramic view of the Black Sea.

It’s one of the most beautiful gardens in Trabzon, located specifically in the city center. The garden is characterized by its modern architectural style, as it was implemented by the most skilled engineers in Turkey, which made it a painting that mixes nature and modern industry, and what also made it able to leave a trace In the same visit so that the feeling of longing after the tour. 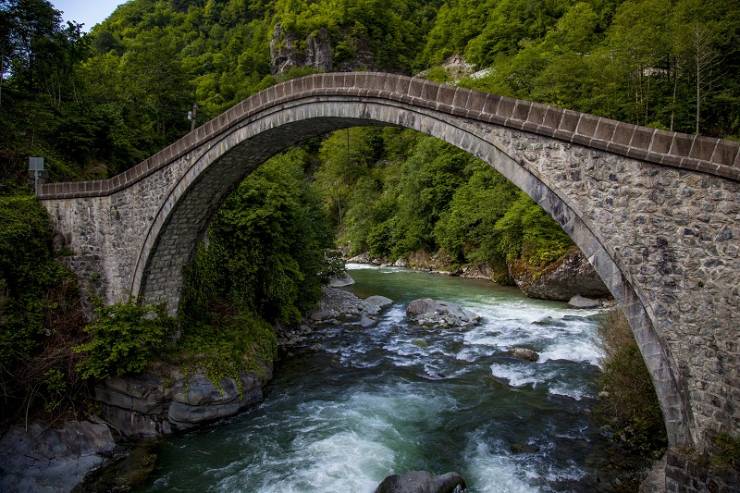 It is a dense forest on the road to Sumela Church, which includes a group of picturesque waterfalls and many seating areas for recreation. The park is distinguished by its historical landmarks, in addition to a range of facilities and services.

It’s one of the most enjoyable places in Trabzon, overlooking the Black Sea coast, and containing a water park and multiple swimming pools suitable for all ages, in addition to a number of facilities and services to serve visitors in a distinctive way.

The lake is only 12 km away from the center of Trabzon, and it is located among a group of green and densely forested mountains. It is one of the beautiful lakes of Trabzon, into which a group of streams flows from the surrounding mountains.

The most beautiful Turkish lakes in northern Turkey, have gained unparalleled popularity in terms of tourist turnout, and are one of the most important tourist attractions in Turkey.

The lake is 96 km from the center of Trabzon. It is located in a deep valley among the wonderful green mountain heights, surrounded by forests on more than one side, and the mountains surrounding the lake are mostly covered by fog.

It’s one of the most important shopping centers in Trabzon, which includes many local and international stores and brands, as well as a bouquet of rich Turkish restaurants, and is located very close to Trabzon Airport.

It’s located in the very center of Trabzon. It is an extended market that includes many clothing stores, as well as shops for antiques and women's accessories, and a group of restaurants and sweet shops, and we can compare it to Istiklal Street in Istanbul

It’s a large shopping complex, but smaller than the Forum Trabzon complex, and contains many Turkish brands such as LC Waikiki, and on the second floor contains a group of international and local restaurants. It also contains a game-equipped place on the ground floor of the mall, in addition to a huge shopping mall for foodstuffs and more.

It’s one of the smallest malls in Trabzon. It is only a 15-minute walk from the main city square and enjoys the same features as other commercial malls.

It’s a popular market in the city center of Trabzon, not far from its coast. It is a good market for shopping for spices and olives. It can be walked around to see the old and popular neighborhoods in the city and is characterized by its cheap prices.

The area was named after Sultan Murad VI, who passed through it upon his return from Iran, and prayed Friday with his army. The heights of Sultan Murad are about 106 km east of Trabzon.

It is a land of dreams or part of a lost paradise, captivating the eyes with its views from the heights of the mountains and above the clouds.

The area is characterized by its wonderful summer, which does not leave greenery and the fresh air, and its white winter that is covered with snow, with the possibility of seeing its wild animals, such as deer and squirrels.

The plateau reaches a height of 1,600 meters above sea level and is characterized by stunning natural beauty and various tourist facilities, 55 kilometers from the center of Trabzon.

The clouds in Haydernabi touch the tops of the mountains, in an enchanting view of beauty, and therefore the region is characterized by its nice and cold weather even in the summer. 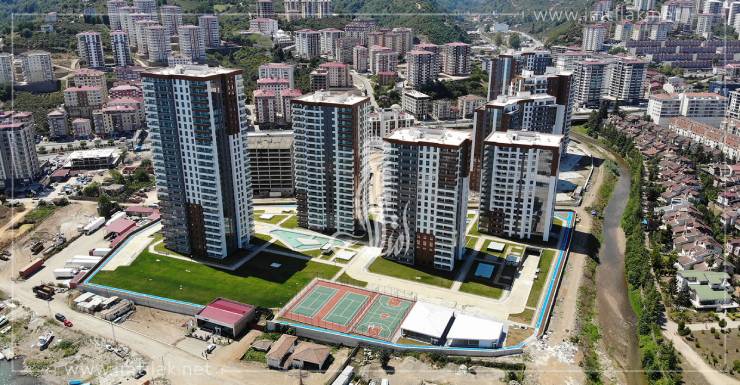 The importance of the tourist state of Trabzon is evident, as it has become one of the most attractive cities in Turkey, especially in the summer. Which made it a preferred destination for Arab tourism enthusiasts in particular, due to its tourist diversity, its breathtaking beauty, and its richness of landmarks, lands, and virgin forests, which cover the area with a green cover.

Due to the aforementioned, we say that Trabzon is one of the Turkish cities with a promising tourist future, which could constitute an incentive to think about exploiting tourism investment opportunities in one of its well-studied and successful projects.

Read more: What Is The Best Place To Invest In Trabzon Real Estate?

The value added by tourism to real estate in Trabzon

No doubt that the real estate reality in Trabzon will be affected by its richness of tourism, and it is natural for it to have an impact on the increase in demand for real estate ownership opportunities within its modern projects in particular.

The real estate market in Trabzon has been experiencing remarkable activity in recent years, and a steady rise in real estate prices within it, which nonetheless remains much cheaper than Istanbul, with options for owning large-sized apartments and villas at relatively acceptable prices.

Your Guide To Getting To Know The Akçaabat Area In Trabzon