During a historic visit of Turkish President Recep Tayyip Erdogan to Abu Dhabi, during which he strengthened bilateral relations between the two countries.

The visit of Turkish President Recep Tayyip Erdogan to the United Arab Emirates on Monday, February 14 of this year, witnessed the signing ceremony of 13 agreements covering many areas, the most important of which are investment, defense, transportation, health, and agriculture.

Abu Dhabi Crown Prince, Sheikh Mohammed bin Zayed Al Nahyan, affirmed the UAE's keenness to strengthen partnership relations with Turkey during the coming period, as the Sheikh was at the head of the recipients of Turkish President Recep Tayyip Erdogan at Qasr Al-Watan in the capital, Abu Dhabi.

Cooperation and partnership agreements between Turkey and the UAE

The signing ceremony of the agreements between the delegations of the two countries began immediately after the meeting between President Erdogan and the Crown Prince of Abu Dhabi, Sheikh Mohammed bin Zayed.

In this context, the two countries signed a memorandum of understanding in the field of health and medical sciences, by Turkish Foreign Minister Mevlut Cavusoglu and Minister of Health and Community Protection Abdul Rahman Al Owais.

In the field of industry and advanced technologies, the Turkish Minister of Industry and Technology, Mustafa Varank, signed a memorandum of cooperation with his Emirati counterpart Sultan bin Ahmed Al Jaber.

Turkish Trade Minister Mehmet Muş and his Emirati counterpart Abdullah bin Touq Al-Marri signed a joint statement on the start of negotiations for the Comprehensive Economic Partnership Agreement between Turkey and the UAE. 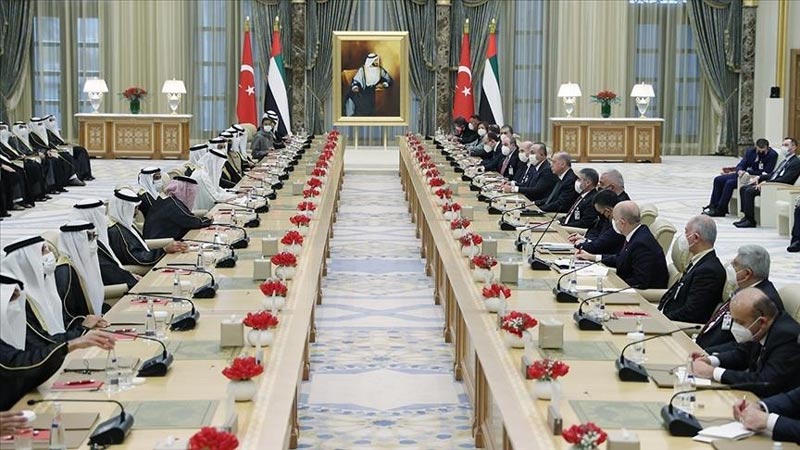 In the field of agricultural cooperation, the Turkish Minister of Agriculture and Forestry, Bekir Pakdemirli, signed a memorandum of cooperation with the UAE Minister of Climate Change and Environment, Maryam Al Muhairi.

The Turkish Minister of Transport and Infrastructure, Adel Kara Ismailoglu, and the Minister of Foreign Trade, Thani bin Ahmed Al-Zeyoudi, also signed a cooperation agreement in the field of land and sea transport.

The two countries also signed a memorandum of understanding on cooperation in the field of sports and youth, by Turkish Minister of Culture and Tourism Mehmet Nuri Ersoy and UAE Minister of State for Youth Affairs Shamma Al-Mazroui.

In the field of disaster and emergency management, Turkish Interior Minister Suleyman Soylu signed a memorandum of cooperation with the head of the National Authority for Emergency, Crisis, and Disaster Management Ali Saeed Al Neyadi.

A meteorological memorandum of understanding was also signed, signed by Turkish Foreign Minister Mevlut Cavusoglu, and Faris Muhammad Al-Mazrouei, Chairman of the Board of Trustees of the National Center of Meteorology.

The head of the Communication Department in the Turkish Presidency, Fahrettin Altun, signed a cooperation protocol in the field of media and communication with Saeed Muhammad Al Attar, Director of the Media Office of the UAE Government.

The President of the Turkish Defense Industries Corporation, Ismail Demir, signed with Tariq Abdul Rahim Al Hosani, CEO of the UAE Tawazun Economic Council, a letter of intent regarding the start of cooperation meetings in the field of defense industries. 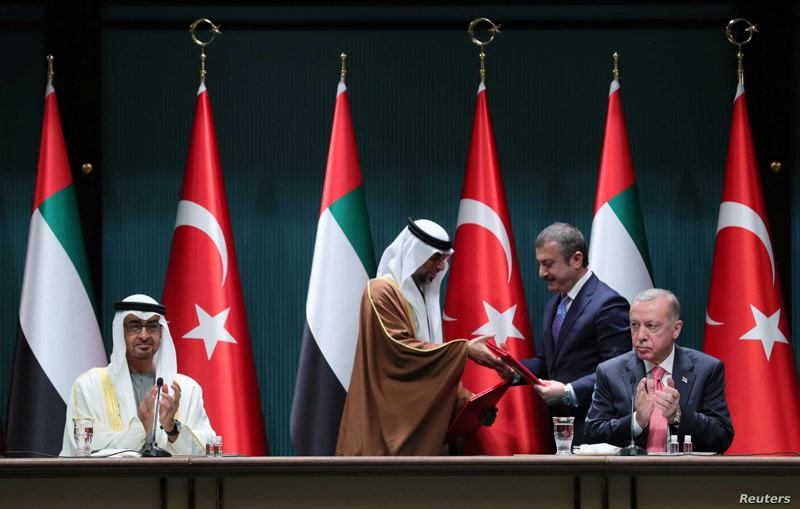 An Emirati warm welcome for the historic visit

This visit of Turkish President Recep Tayyip Erdogan came as a continuation of the understandings that were agreed upon during the visit of Abu Dhabi Crown Prince Sheikh Mohammed bin Zayed to Turkey on November 24 last year.

The Crown Prince of Abu Dhabi welcomed President Erdogan's visit to his "second country, the UAE," and expressed his hope that "this important visit will give a strong impetus to the path of strengthening cooperation and building a new prosperous phase of work and partnerships."

Sheikh bin Zayed conveyed to President Erdogan the greetings of Sheikh Khalifa bin Zayed Al Nahyan, President of the United Arab Emirates, and his wishes for health and happiness, and for Turkey and its people continued stability, progress, and prosperity.

The Crown Prince of Abu Dhabi and President Erdogan reviewed opportunities for cooperation between the two countries, and the two sides exchanged views on a number of issues and developments in the Middle East, stressing the consensus of Turkey and the UAE on the importance of supporting efforts and peaceful solutions aimed at enhancing security, peace, and stability in the region.

The Crown Prince of Abu Dhabi stressed the UAE's keenness to strengthen the partnership with Turkey, encourage it during the coming period, and double the volume of Emirati-Turkish trade exchange, as the total value of non-oil trade between the two countries in 2021 amounted to $13.7 billion, an increase of 54% compared to the previous year, an increase of 86% over the year 2019.

The United Arab Emirates ranks first in the Arab world in the most foreign countries investing in Turkey.

It is noteworthy that Turkish President Recep Tayyip Erdogan's visit to the United Arab Emirates is the first since 2013, during which he is accompanied by a large delegation that includes the ministers of foreign affairs, interior, finance, trade and industry, technology, transport, infrastructure, culture, tourism, agriculture, and forests, in addition to the head of the Defense Industries Authority. 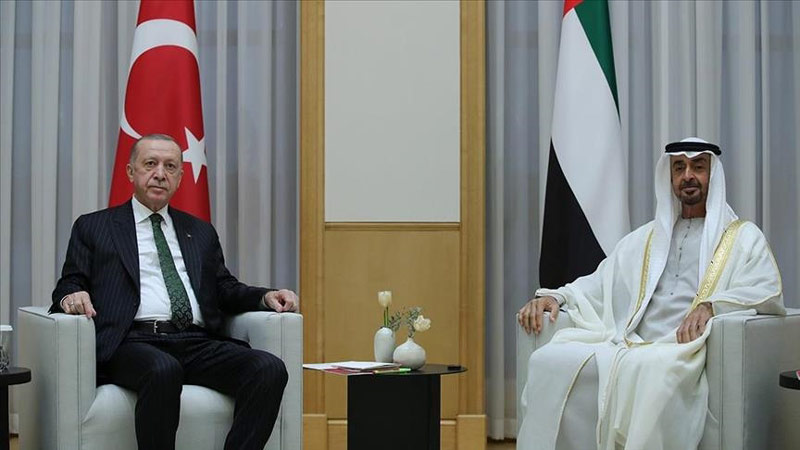 The Seventh Arab Book Fair will be launched in Istanbul, Turkiye, from 1 to 9 October 2022

4,745
Search for your apartment