In this article, we answer the most important questions about the new Istanbul Canal Project and provide clear information about this important project

The number of straits of the entire world is 44, but now the world is looking towards Istanbul Canal Project, as it is one of the huge projects the likes of which are very few in the world in terms of importance and location.

Today, Turkey is putting the cornerstone to start the first steps of establishing the new Canal Project to be of support for the important Canal of Bosphorus, after the what the Canal Project went through of a series of political and technical arguments, around which many unanswered questions circulated.

In this article we will learn about this grand project by answering 20 questions, we hope that they answer all the questions regarding this project:

The construction of the project is expected to start in the current year, as this year will witness the first step in the construction works of this new water canal.

The construction works of the channel are planned to be completed between the end of 2025 and the beginning of 2026.

The main objective of establishing the new canal is to ensure safety and comfort and security for marine navigation in Turkey, by reducing the marine traffic congestion risks in the Bosphorus Strait, thus, protecting the property and lives of people, contrary to the rumors saying that the goal is exploiting marine traffic congestion and turning it into a new source of money.

The canal will be equipped with marine navigation traffic control systems and a ship communication system that works around the clock, it will also be equipped with weather-sensitive systems that raise the lighting in the Canal when the weather becomes foggy, in addition to many other things that provide safe marine transit service using the latest technology.

According to the plans, the length of the new water canal is about 45 Kilometers.

The best path that has been chosen to establish the canal within Istanbul city starts from the isthmus that separates the Marmara Sea from Küçükçekmece Lake and continues along the Sazlıdere dam basin, then it passes through Sazlıbosna Köyü to the east of Dursunköy then Baklalı Köyü, after that it goes to the east of Terkos Lake where it will enter the Black Sea.
Part of the path will be about 7 km long within the Küçükçekmece lake, another part will be 3.1 km long within Avcilar region, also another will be 6.5 km long inside the Başakşehir region, while the remaining 28.6 km part will be in Arnavutköy Region.

The exact date for Istanbul Canal's tender has not been specified yet, but it is expected to be at the beginning of the current year.

Yes, the new water canal crosses near Istanbul International Airport, where the Black Sea port for container shipping Karadeniz Konteyner Liman to which will be built on the Canal to the east of its northern entrance, and it will be one of the largest commercial seaports in the world and located within Istanbul Airport, this seaport is one of the projects planned to be established with the new Istanbul Canal Project.

The cost of the post-planning stage of the Canal Project is estimated at $ 10 billion.

The post-planning and project preparation work cost of the Istanbul Canal will be $ 15 billion.

According to the calculations, the minimum net average of what will be collected from ships transiting through the new channel will be about $1 billion per year, and the income will reach $5 billion per year when 50,000 ships cross the canal.

The number of employees in the canal project is expected to be between 8 to 10 thousand people in the construction phase and 500 to 800 people in the operating phase.

The reserve construction area of the canal project is 350 thousand dunums. 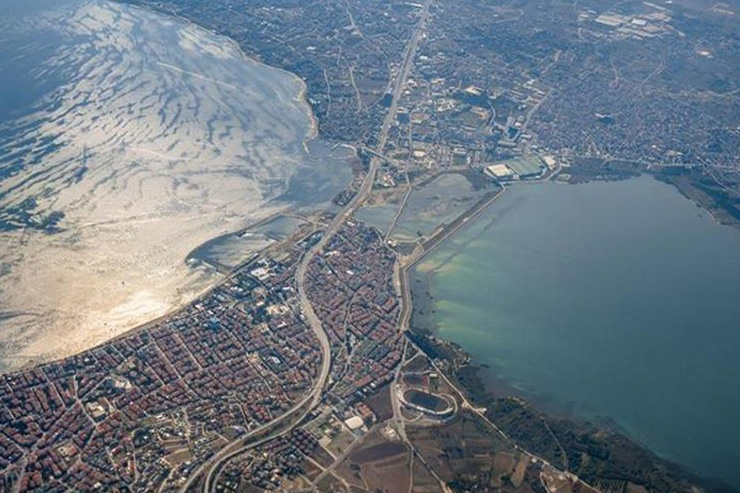 The new Canal will provide safer marine transport operations, and this will be evident in the feasibility study that will be included in a report of a Dutch company specialized in this matter regarding the global navigation traffic in the Bosphorus Strait, which is considered one of the most dangerous sea routes in the world due to the congestion in it, besides, this congestion problem threatens the lives of people who live around it.

Dutch, French, and Belgian companies will participate in the project works, which are companies with long experience in this field.

The soil resulting from the excavations in the Canal project will be used to level the slopes between the Black Sea and Durusu Lake.

The area between the Black Sea and Durusu Lake will be designated for parks, which is the area that will be leveled using the soils resulted from the project.

Yes, the committee has approved the Environmental Assessment Report in its final form.

In general, the new Istanbul Canal is considered one of the largest Megaprojects that Turkey has been through in recent years, and it has started to positively affect the real estate prices near and around it, which is what we would mainly like to refer to in Imtilak Real Estate, where it is expected that the prices of lands and real estate in the vicinity of the Canal will increase significantly as the project progresses and after being completed, similar to the prices of real estate around the famous Bosphorus Canal.

For more information, you can read our article: Istanbul New Water Canal: A Pioneering Project And Wonderful Opportunities