Erdogan cut the opening ribbon of Basaksehir Medical City, learn more about the details of the opening of this historic edifice of medical tourism in Turkey

"Basaksehir Medical City  is a great edifice in the history of Turkish medical tourism and in the history of the city that embraces this edifice, Istanbul city, will be a the-first-of-its-kind health center which is in the world." These statements made by the President of the Turkish Republic during the opening of Basaksehir Medical City with the participation of the Japanese Prime Minister Shinzo Abe, through a video conference.

The President of the Turkish Republic cut the opening tape of Basaksehir Medical City in the presence of a high-level delegation of ministers, governors, ambassadors, and representatives of the companies that helped in build this great edifice.

Among members of the official delegation, there were the Minister of Health Fahrettin Koca, Minister of Defense Hulusi Akar, Minister of Industry Mustafa Varank, Minister of Transport and Infrastructure Adil Karaismailoglu, the Japanese Ambassador to Ankara Akio Miyajima, and the Governor of Istanbul Ali Yerlikaya.

Erdogan added in his speech that thanks to the technological infrastructure designed in it, the buildings, and facilities that it owns, Basaksehir Medical City will be one of the most important and prominent Turkish brands regarding the medical tourism, and thanks to its specifications it has a prominent place among the other countries, making Istanbul a global health center to which the patients come from all over the world.

Erdogan stressed in his speech that Turkey, in cooperation with the Japanese companies, has made great strides in carrying out such mega projects like the  Osman Gazi Bridge and Marmaray Tunnel, noting that Basaksehir Medical City will be called the medical city of Başakşehir Çam and Sakura, to express the close cooperation between Turkey and Japan in this project, adding this project as a new project in the continuous Turkish-Japanese friendship. 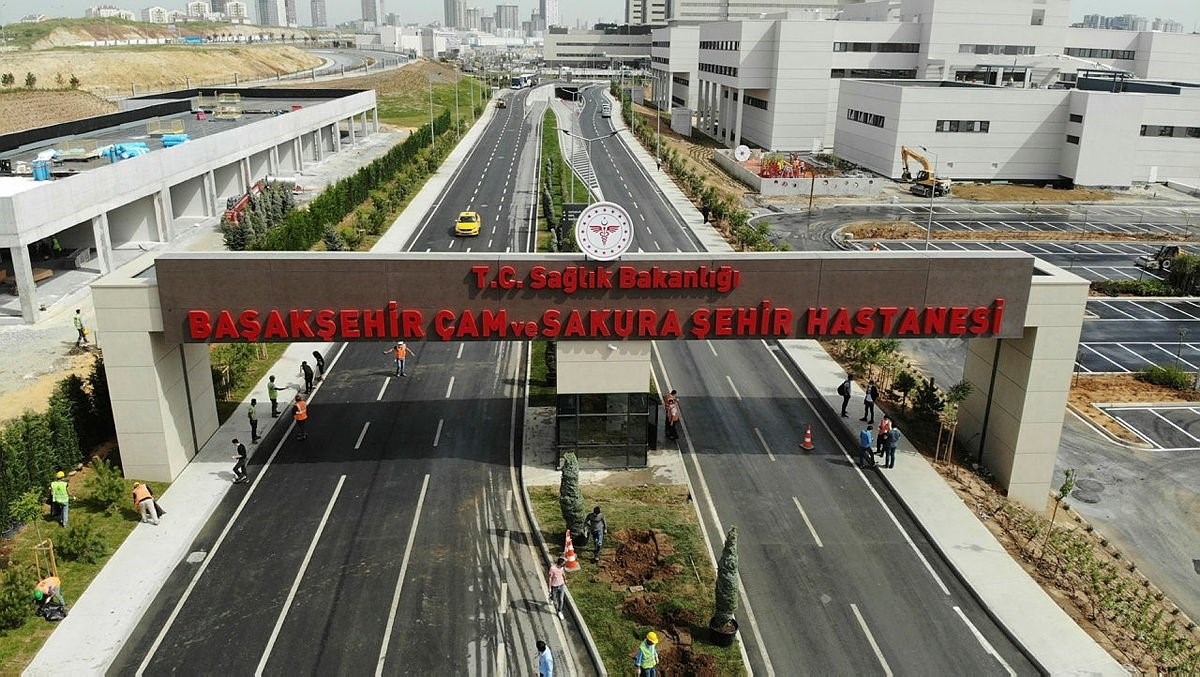 In his speech, Erdogan mentioned that the closed area of the medical city is one million and 21,000 square meters, and it was surrounded by a group of pine and cherry trees on an area of about 15 dunums. On the inside, it includes 456 intensive care rooms, 2,682 beds, 725 clinic rooms, and 90 operating rooms.  Basaksehir Medical City also includes 3 Heliports and parking lots for 8,134 cars.

In terms of providing services to patients, the speech of the President of the Republic stated that Basaksehir Hospital will provide medical services in 107 branches and it is planned to receive 35,000 patients and to perform 500 surgeries every day.

Erdogan stressed in his speech on the necessity of establishing metro lines next to the medical city in Istanbul in order to facilitate the citizens ’access to the hospital, and he gave instructions on this matter to the Minister of Transport to implement this project within a year or a year and a half.

In a related context, Erdogan talked about the latest situation developments regarding the Corona in Turkey, noting that the number of daily infections with this virus reached less than 1000 starting on Wednesday, the 20th of May 2020. However, he noted that the preventive measures taken to fight this virus should not be abandoned.

Erdogan stated in his speech that while other countries were suffering from the collapse of their health systems, Turkey and Japan were able to achieve great and impressive success thanks to the tireless efforts made by officials of both countries to limit the spread of Coronavirus.

Erdogan stressed that Turkey did not stand idly-by towards the countries that suffered from the Corona crisis, on the contrary, it continued to provide medical support by sending medical supplies to more than 80 countries.

At the end of his speech, Erdogan congratulated the medical staff who are working in the hospital on the upcoming Eid Al-Fitr, wishing them continuous success.