The Turkish President inaugurates the "Çanakkale Bridge", the longest bridge of its kind in the world, coinciding with the 107th anniversary of the Ottoman Empire's victory in the Battle of Çanakkale.

Turkey commemorates the 107th anniversary of the victory of the Ottoman Empire in the Battle of Çanakkale against the Allies, by opening the Çanakkale 1915 bridge, the longest of its kind in the world. Turkish President Recep Tayyip Erdogan participated in the opening ceremony, on March 18, 2022.

The name of the bridge "Çanakkale" refers to the city where the battle took place, while the 1915 figure stands for the year of the battle.

According to Turkish reports and the statements of Minister of Transport and Infrastructure Adil Kara Ismailoglu, the "Çanakkale 1915 Köprüsü Bridge" is characterized by the following: 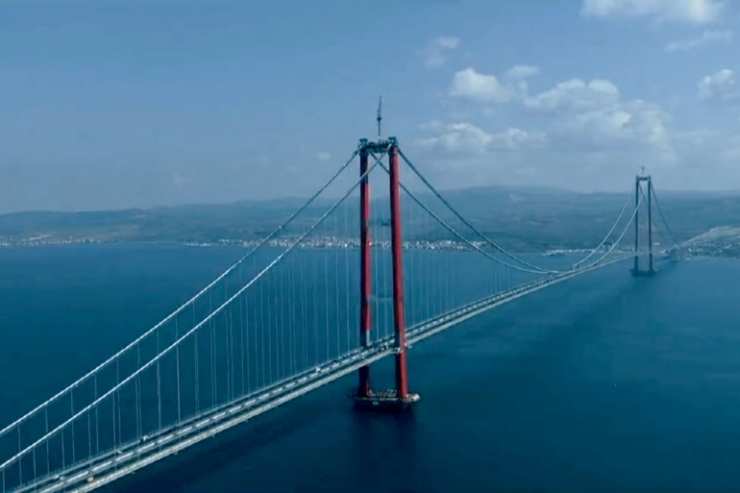 The first bridge outside Istanbul connecting Asia to Europe!

It is noted that the Çanakkale Bridge gives the state importance in the transport line from the "Thrace" region of the north-west of the country, to the Aegean and the Mediterranean Sea, and will give it importance in the Marmara region as well.

The most important sections of the Istanbul-Izmir highway

The 1915 Çanakkale Bridge is the most important section of the highway project linking the states of Tekir Dag, Çanakkale, and Balikesir, which is 352 km long and includes 31 bridges, 30 bridge intersections, 143 upper and lower corridors, and 5 tunnels.

The highway also links the cities of Istanbul and Izmir and would contribute to easing traffic in Istanbul, especially on suspension bridges, and significantly reduce transportation costs to the Aegean region.

It was done a year ahead of schedule!

According to experts, the Turkish government's interest in the completion of the Çanakkale Bridge is a prelude to moving on to other giant projects, which accelerated the implementation of the bridge, and its opening a year ahead of schedule.

The bridge was carried out by 5,000 workers, including 649 engineers, with 809 vehicles used for heavy equipment.

Watch in this video an aerial tour over the only coastal city in the state of Istanbul, all roads lead to the gem of the Marmara Sea: